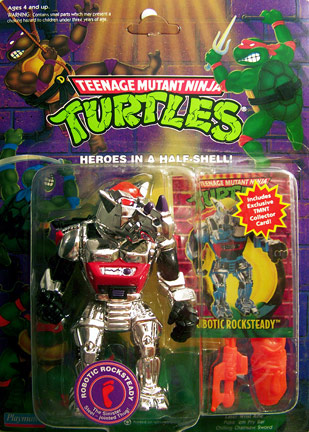 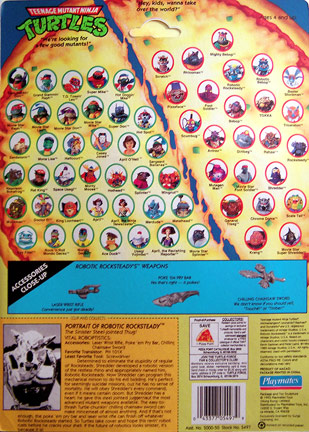 Determined to eliminate the stupidity of regular ol’ Rocksteady, Shredder developed a robotic version of the restless rhino and appropriately named him Robotic Rocksteady. Now Shredder can program this mechanical minion to do his evil bidding. He’s perfect for seemingly suicidal missions, cuz he has no sense of mortality. He will obey Shredder’s every command, even if it means certain doom. But Shredder has a heart; he gave this steel jointed juggernaut the most advanced Mutant weapons available. The easy-to-thrash Turtle-chunkin’ chilling chainsaw sword can make mincemeat of almost anything. And if that’s not enough, the poke -em pry bar and laser wrist rifle can finish off whatever Robotic Rocksteady started. So Turtles take cover and hope this ravin’ robot rusts before he cracks your shell. If the future of robotics looks sinister, it’s because it is!