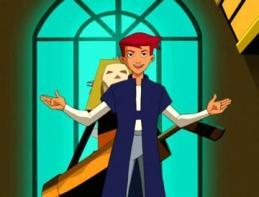 Cody Jones is the great grandson of April O’Neil and Casey Jones. He is the heir apparent to O’Neil Tech. He accidentally brought theTurtles and Splinter to the year 2105. He created Turtle X, which is a machine with great power. He was learning ninjutsu from the Turtles.

All his life, Cody had mainly lived inside his penthouse, mainly to protect him from outside influences. When his parents passed away, his uncle Darius Duntook legal guardianship over him and position of CEO of O’Neil Tech

Cody had always been entranced by artifacts of the past, mostly connected to the Turtles, whom his great-grandparents mention in their journal. He once tried to create a time window to enable him to see the Turtles’ exploits but accidentally brought them and Splinterto 2105. He had Serling, his robotic caretaker, to go an retrieve them before they get into trouble. Serling was only able to get everyone but Mikey, who was separated from the others. But thanks to the work of two geniuses (Donatello & Cody), they were able to locate him with his residue temporal signature and rescued him from the Street Phantoms.

Next day, Cody tried to reproduce the same effect for the time window but failed. He needed to repair a damaged circuit board but needed to go to O’Neil Tech to get it. Just then, Darius comes in as the others disappear. Darius lectures Cody over the importance of his safety and that it would be best to stay inside. But the Turtles convinced him to take a slide on the wild side and go straight to O’Neil Tech. So Darius decided to show him how dangerous the outside was by unleashing his Inuwashi Gunjin to capture him. But the Gunjin threaten Cody’s life in exchange for their freedom. Thankfully, the Turtles arrive to save him, armed with futuristic weapons made by a transcendental lathe.

Eventually, Cody is able to repair the time window to send the Turtles back.Tempus Fugit He later watches his great grandparents wedding though the time window.

Cody is a combination of both April’s smarts and Casey’s hardheadness.

By the end of the episode Playtime’s Over, it is revealed by Starlee that his full name is Cody Augustus Jones. It is probably in honor of April’s uncle Augustus O’Neil.