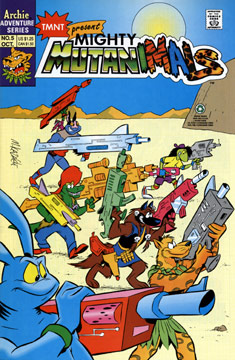 Azrael asks the Mutanimals to help her save the Path of the Four Winds – but before she can explain her plight, Ray Fillet passes out from dehydration. The shape-shifter leads our heroes to a cave which holds a spring that allows Ray to recover. As they wait for the heat of the day to pass, Azrael explains that the Grim Reaper that has kidnapped Juntarra has also created the desert that they’re in. It wasn’t long ago that the area was filled with swamps, lakes and tropical vegetation – including Lake Resurrection, which was the final stop for those who traveled the Path of Four Winds. With this extra knowledge, everyone is more determined than ever to defeat the Grim Reaper and his allies and save Jagwar’s mother.

Later that night, the Mutanimals and Azrael journey through the newly formed desert to the Grim Reaper’s skull-like stronghold. Inside, we see that Juntarra has been tied to a chair with none other than Kid Terra, who Null has captured for purposes of revenge. Juntarra angrily tells Kid Terra her origin story, how her parents were Spanish missionaries that had journeyed to Brazil to convert the Mayoruna people. However, the tribe had no interest in being converted and thus killed the missionaries, although they respected the innocence of the child and allowed her to join them. As she grew older, Juntarra became disenchanted with the Mayoruna’s beief that only men could become Shaman, and thus she set off on the Path of Four Winds to become a person of knowledge. Kid Terra asks the woman why Null and the Reaper were interested in her, and Juntarra explains that it might be because she is Jagwar’s mother.

As darkness falls, the Mutanimals prepare thier attack, but before they get far, they’re met by Null and six robots armed with guns. Everyone begins firing, but the robots seem mostly impervious to the Mutanimal’s weapons. One by one our heroes are shot, until only Leatherhead and Azrael remain standing…