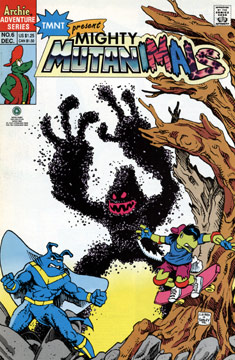 The Mutanimals, the TMNT, Master Splinter and Ninjara face off against Pestilence, Famine, War and Death. Ray Fillet notes that the Four Horsemen of the Apocalypse will not have an easy battle when facing the combined force of the mutants, and thus Death uses sorcery to divide our heroes into three separate groups and teleports them away from one another.

Null dumps the unconscious form of Azrael inside Death’s stronghold where Juntarra and Kid Terra are held captive. Kid beseeches his old boss to let the women go, but Null states that he plans to put them in his harem. Juntarra screams in rage and Kid Terra vows that he’ll stop Null.

Outside, Death opens a crate and removes marionettes of Famine, Pestilence and War and begins jostling them around, exclaiming how much he loves his toys…

Master Splinter, Leo, Ray Fillet, Wingnut and Screwloose find themselves in the country wearing military garb. Jagwar, Don, Raph and Mondo are teleported into a research center and are dressed in scrubs. Mike, Ninjara, Dreadmon and Leatherhead find themselves standing in a cornfield – starving. They head out to look for food and see a huge line of people waiting to get some meager supplies.

Back at the research center, we see a lab full of caged monkeys. Jagwar ponders if they should set the primates free when Pestilence appears and warns them against it, as you never know what type of virus might be released along with them.

Back at the farm, our heroes receive orders to infiltrate a nearby barn and remove the hidden missiles. Leo remarks on the absurdity of the endeavor, but they forge ahead, and discover that War resides within the building, and he has a huge nuclear weapon with him.

By the time Ninjara, Dreadmon, Raph and Leqatherhead get to the end of the food line, there’s nothing left for them. Our heroes stand shocked and emaciated.

Pestilence attacks and Jagwar releases the monkeys to help the mutants fight the beast.

Ninjara points out that there’s still one truck full of food stock, but the woman distributing it explains that the food on that vehicle is going to the president’s office. Dreadmon exclaims that’s wrong when the people are starving, but the woman points out that she can do nothing about it because the military is too strong. As the truck drives off, one can falls out of the back and our heroes rush to pick it up. Dreadmon opens the container, but inside is Famine, who emerges and captures the mutants.

War battles our heroes in the barn, when it is struck by a “friendly fire” missile. War carries the defeated mutants away.

Pestilence is able to possess the monkeys and turn their attack on the mutants, who are defeated.

Back in the desert, we see Death with is marionettes, the prone bodies of the Turtles and Mutanimals at his feet.