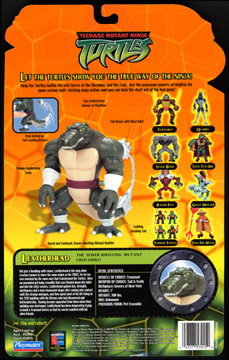 Not just a handbag with claws, Leatherhead is the only other creature known to share the same origin as the TMNT, for he too was mutated by the same ooze that transformed the Turtles. Once an unwanted baby pet crocodile that was flushed down the toilet and into the city’s sewers, Leatherhead gained size, strength, intelligence and a more humanoid shape after coming into contact with the strange Mutagen, and then spent most of his life living in the TCRI building with the Utroms who had discovered and befriended him. Having become separated from them when their building was destroyed, Leatherhead has desperately trying to build a Transmat device so that he can be reunited with his alien friends!