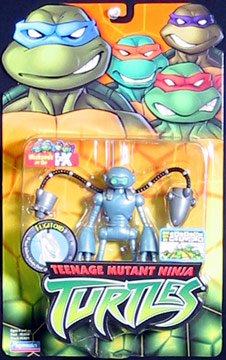 FUGITOID
The Robot With The Mind Of A Man!

Let me tell you a story… a lonnnnnnng story!

It was a dark and stormy night far across the universe when the most brilliant scientist on the planet D’Hoonnib, Professor Honeycutt, received a distress call from his worker robot, Sal. Honeycutt, still wearing his parapsychological Mentawave helmet (a device for boosting mind powers like telepathy and telekinesis) from an experiment-in-progress, ran outside in response to Sal’s call. While disentangling Sal from some conductivity coils, the two were struck by lightning, destroying Honeycutt’s body… but not before triggering the Mentawave helmet and transferring the Professor’s mind into Sal’s robotic body! This tragic turn of events was witnessed by the warmongering Federation General Blanque, who had been spying on Honeycutt in order to learn about the peacenik professor’s Teleportal device – an invention capable of transporting beings from planet to planet as a means to promote peace, not war… and certainly not the General’s Federation soldiers, nor the Triceraton forces warring with the Federation! Sal/Honeycutt goes on the run and is branded a fugitive from both Federation and Triceraton justice – and thus the Fugitoid is born! But it’s not until the Fugitoid hooks up with the space-hopping Teenage Mutant Ninja Turtles that the real action-adventure begins!