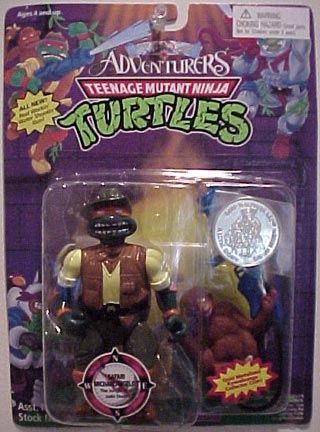 Deep in the jungle primeval, past civilization, beyond time and pizza delivery routes, there lies a place that s only known by one Turtle. A Turtle by the name of Safari Michaelangelo. Born to explore, he blazes a trail through the most adventurous areas known to man or Mutant. Together with his banana munchin’ monkey pal, this adventurous Turtle carves out the jungle and uncovers mystical places – all in search for a lost gold coin. A coin so precious it has been given a name: the “Kowabunga Collector Coin.” And it is not free. It carries the very price of adventure and danger which this Turtle knows too well. Just as Deep Sea Diver Leonardo and Artic Donatello must face the dangers of their endless searches for the coin, so too must Safari Michaelangelo face wild and unruly natives. If the natives dare to get truly restless, Safari Michaelangelo quickly gives them a blast with his real workin’ water shootin’ gun. Throughout the jungle, this trekkin’ Turtle is known as “IKTA MIKTA LIPTA,” which roughly means “The green water god with a monkey on his back who is looking for a gold coin!” And if things get too desperate, Safari Michaelangelo’s trusty, never rusty, hunting knife is there to back him up. So get ready for the adventure of a lifetime; put on your hikin’ boots and spray on bug repellent, cuz Safari Michaelangelo is takin’ you along to find the fateful Kowabunga Collector Coin. Sure, sure, you can go alright – that is, if you can handle the heat, the danger and the lack of freash pizzas.