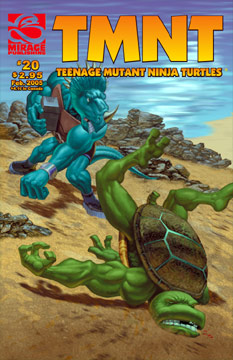 The Regenta’s bodyguards show up and it’s not just another day at the beach for the princess (or Mikey). Don learns that things aren’t exactly as he thought they were. Casey Jones dons his vigilante gear and runs into a female version of Nobody on the city streets. Leonardo returns to the sewer lair and discovers Raphael and the Fugitoid.