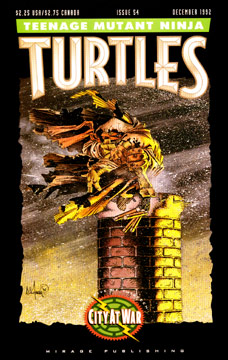 Casey has taken a job as a grocery bagger, but he messes up by putting the bread on the bottom of the bag, which enrages his boss. The angry older man gets in Jones’ face and reads him the riot act and insults Jones. Casey gets angry and puts a bag over the man’s head and punches him in the face, sending him flying. Jones then storms out, but as soon as he’s outside he realizes that he needs the job and goes back inside. Casey apologizes for the incident and asks for his job back. The man makes Jones get on his knees and beg for the work, but then screams “NO!” in Casey’s face. So Space Case lets another punch fly and heads out.

Master Splinter is exploring the abandoned factory, getting a sense of loneliness. The rat arrives at the precipice of an old silo and peers into its depths. Suddenly the bricks give way and the Sensei plummets into the maw of darkness.

April is working a new job as a computer programmer. Her boss hits on her, leaving April feeling even more doubtful about California.

Master Splinter awakes at the bottom of the chimney with a broken leg. The Sensei takes a piece of wood and makes a splint to insure that the bone will heal properly. When Splinter tightens the cloth to hold it tight, the pain causes him to blackout.

Robyn and her baby pick April up from work. April is trying to be upbeat about the job. Robyn complains about her ex-husband and the three go off in search for a Christmas tree.

The TMNT are in their water tower base as a snow storm rages outside. Mikey gets back from patrol as the TV reports on the street violence caused by the Foot as well as other international horror stories. Leo is still brooding , not knowing what to do. Raph suggests that they should ask Splinter, and Leo replies that it’s time for them to grow up and leave this life behind.

“Leave?” Mike gasps, “But… but what about duty? What about… honor?”

“Honor? Heh… I’m beginning to think there’s no place for honor in this world,” Leo replies, “Greed… hatred… violence… the lust for vengeance. These are the primary motivators.”

“What motivates you, Leo?” asks Raph.

“Lately… I don’t have a clue.” Leonardo answers.

The Japanese business woman is on a personal jet on her way to New York. We finally learn her name: Karai. Her assistant brings another video tape, this one clearly capturing Donatello in the frame. Karai is pleased to see this.

Splinter wakes and tries to stand, but the pain is too severe. The Sensei begins to worry for his life, with winter arriving, no food to eat and a bum leg that will prevent him from leaving the silo.

Casey and Gabby are decorating a very modest tree. Gabby is feeling self conscious about her weight from the pregnancy. Casey gives his girlfriend an early present, some sexy lingerie. This makes Gabrielle cry, and Casey consuls her. Not a master tactician, our man Casey.

We see the old man in the hospital, taking his first steps with the help of a nurse.

A Foot headquarters is attacked by one of Shredder’s Elite. The ninja kills everyone inside and then blows up the building.

Mike and his brothers are listening to the news and trying to keep warm in the water tower. The report is about the recent bombing.

“The police department suggests that this blaze is linked to the recent wave of destructive incidents in the City… leaving this reporter to wonder: when will this violence stop?”