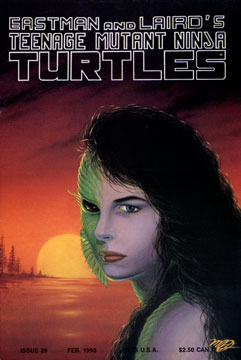 “Sons of the Silent Age”
As the issue opens we see an eagle soaring over the Connecticut River, in search of a meal. It spots the fins of what appears to be a fish and swoops down on its prey. As the bird is about to grasp the back of the fish, large clawed hands erupt from the water and ensare its feet. The eagle struggles with its adversary and escapes… or was it set free?

Cut to a bridge over the water, where Raphael is sulking while Leo and Casey try to console him.

“The river… I suppose…” Raph muses.

Casey then asks Raph to tell him what’s wrong and Raphael says that Casey couldn’t understand because he’s human. Leonardo tries to get the dejected Turtle to confide in him, but Raphael gets angry and tells his comrades not to crowd him. Leo states that he can’t understand Raphael and Casey decides to give up trying.

“Ahhh, the Hell with him, Leo,” Casey announces as walks off, “He’ll come around when he’s ready.”

The two leave Raphael to join April and the other Turtles a few meters down the bridge. Alone to ponder his thoughts, Raph broods over the TMNT’s last encounter with the Shredder, where Raphael’s rash behavior and unwillingness to fight with the team almost cost him his life. The mutant terrapin then recalls his close call from “The River” saga (issues 24-26).

April watches Raph mulling over the recent past and wonders when he’ll simply accept all that’s happened to him. Casey then announces that it’s time for them to head downriver and the group board a raft and sail downstream.

April is keeping her diary and narrating the story, waxing poetically about the surroundings and contemplating the Turtles’ recent behavior, which has gotten increasingly sedate the past few months. April concludes that the Turtles have no path, no direction, and have become listless since defeating the Shredder. Splinter suggested that his students needed to take some time and go on this trip, and so here they are. As the raft progresses downriver, they pass by a nucear power plant… an omen?

About this time we see a large fin in the stream that is tailing the watercraft. April notes that Raph has sensed something… but nothing comes of it. Casey points out a side stream that’s part of their itinerary and the raft navigates the path less traveled. We now see that there are four large fins in the water, following our heroes.

The crew set up camp and tell ghost stories, but as usual, Raph isn’t interested in group dynamics and wanders off. In short order Raph stumbles upon the form of a half-woman, half-fish creature, struggling on the riverbed, bleeding severely.

Casey is repulsed by the sight, but April and Raph rush to help the creature. April notes that their patient has no pulse, and she orders Casey to help her try CPR. The Turtles watch the proceedings in grim silence as the two humans struggle to stay Death’s hand. Suddenly Raph notices that four very large fishmen have emerged from the river, and they don’t look happy.

“Oh God. It must look like we’re hunting her!” April cries out, “Keep them away – we need more time!”

Raph follows April’s orders and a fight breaks out. The fishmen are strong and agile, but the Turtles hold their own. As the conflict ensues in the depths of the river, April stares into the fallen fishwoman’s eyes, and receives a vision.

“I blink once and I’m pulled into her depths… blink twice and taste sun-warmed flesh cooling in clean glacial pools. The long friendship of the first long-hairs. Twin shadows fleeing white betrayer’s hate. The new way beneath the moon. And then…I am conceived anew. And as I grow, I watch my people wither. Leaving behind young skeletal smiles. The same mindless killer ravages me now, unweaving the fabric of my flesh. Stripping away the memory of my soul. We are the last five. I remember our mother. Black curtain embrace.”

April sees the nuclear power in the background, looming ominously.

Casey finally manages to snap April out of the trance, admonishing her to hurry lest they lose their patient… but it’s too late, the fishwoman has died.

As soon as they notice that they’ve lost their comrade, the fishmen stop fighting the Turtles. The creatures come on shore and lift the body of their fallen clansman.

We see the Turtles watching the fishmen as they carry their last, lost hope back into the waiting waters of the river, and all disappear into its murky depths.

In the final panel we see Casey embracing April as the four Turtles stand watching them.

Epilogue: We see the eagle soaring over the river, it clutches a fish in its talons after a successful hunt . The noble bird lands on the lip of the nuclear power plant’s chimney with its prey.