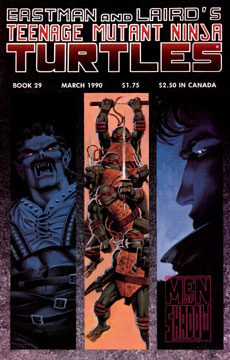 “Men of Shadow”
In this issue’s prologue, we see a man seated in what appears to be a space craft, musing about his desire to be a hero… as his computer accesses files regarding the Necronomicon.

Meanwhile, the TMNT are apparently skirmishing with a gigantic turtle robot in the woods of Northampton as Master Splinter looks on. Suddenly the bot ceases its operations and comes crashing to the ground. The Turtles scramble to open the machine up, and Donatello pops out, explaining how he accidently overloaded the onboard computer and with a few tweaks he’ll have it ready to roll again.

In Arkham, Massachusetts we’re introduced to two boys, named Max and Pervis. Max has just purchased an expensive back issue of a comic book and Pervis is warning him about his parents’ reaction… which is sure to be very negative. Max explains that he’s already in trouble and headed for summer school because he flunked math. The bad news only gets worse as the two lads are assailed by a group of bullies, led by a big fat kid named Barry. Barry grabs Max in a head lock and then tears up his comic before walking off, warning the comic fans that he’ll be back later.

Cut to scene at the University of Massachusetts, where we learn that a group of armed men have taken control of the UMass library annex, called the Whately House. Swarms of police surround the building and the situation is dire and tense. Apparently the house had just been moved to the Amherst site from its original location of Arkham. Almost everyone managed to escape the criminals thanks to two heroic people inside, but those people are now being held captive… the heroic duo being April and Casey! The gunmen have sworn to destroy the museum and kill all inside rather than surrender.

In the Whatley House, April and Casey are tied up and are being held at gunpoint by three pointy eared men who are accompanied by a small horde of what appear to be zombies… zombies that have telltale bite marks on their necks, as if they’d been bitten by vampires. The three malefactors vow to blow up the museum rather than let the humans find physical evidence of their existence. The leader hands a detonator device to a zombie and tells him to hold the button down – if commanded, the underling is to release the button, which will detonate a huge stockpile of TNT and decimate the structure, including all inside.

As April and Casey discuss their predicament, the leader of the criminals, Mallet, snarls at them (revealing vampire teeth) and tells them that they’re waiting for thier Master Traquer to arrive. Mallet then radios a henchmen who is outside in a truck, surrounded by numerous police vehicles, and alerts him to the plan. Apparently the “brainless ones” will be used as a diversion that will allow the vampires to escape with some sort of mystic artifact that they’ve come here to retrieve.

Just then we see the TMNT crawling through an attic window located at the rear of the house. The Turtles walk downstairs and tell Mallet that they’ve only come for Casey and April, and if they’re allowed to leave, there will be no trouble. This amuses Mallet and he tells the Turtles that they will die with their friends. Suddenly, the man from the prologue appears out of thin air and grabs Mallet. The Turtles leap into action. The mystery man informs our heroes that to rid themselves of their undead foes, they must pierce their hearts with wood or separate their head from their body. The Turtles are a bit freaked about the news that they’re fighting zombies and vampires, but they waste no time in breaking up the furniture to make crude stakes. The zombies are dispatched easily, but the vampires turn into bats and fly out of a window. The mystery man has subdued the “neo-dead” slave holding the detonator, and he leaps from the window with the zombie and bomb in tow. As the man and monster fall, the dynamite explodes.

The vampire in the truck below takes this as a sign to flee, and so puts the peddle to the metal, scattering the police as he tears away. The TMNT spot him and Don throws a special tracking shuriken that imbeds itself into the back door of the vehicle, so the Turtles will be able to locate the vehicle later. The guys then untie Casey and April and everyone escapes while the police are distracted by the fleeing truck.

Meanwhile, Max and Pervis are out in a field. Max is standing with his arms spread wide, explaining to Pervis that his home is light years away, that he’s a prince brought to Earth to escape assassination threats. As Max tells his tale (which Pervis isn’t buying for a minute), he screams for his “family” to pick him up and return him to his home planet… and just then something crashes into the ground a few meters away!

Max rushes to investigate, and the mystery man crawls from the wreckage, a real mess his own self. Pervis takes off to get help for the injured fellow while Max helps him to a hidden underground chamber filled with incredibly advanced technological devices (and strange beasties, creatures with one giant eye and bat wings). The man climbs into a pod, telling the lad to stay put and not to touch anything.

As soon as the man is sealed in his pod, Max ignores the instructions and accesses the main computer. He finds the log files and we learn that the man is named Clark Ashton Allard, and he’s being spied upon by the strange bug-eyed creatures that are locked up in the cages. Apparently the beasts are being sent by Master Traquer in effort to keep Allard out of Tracquer’s affairs – which involve something in the Whatley House. Clark notes that the house should never have been removed from its original site, as it was protected by many powerful spells that were broken once it was moved… protective spells that kept the artifacts within the building safe from harming humanity. The Whatley family had safeguarded these artifiacts for generations, and Tracquer had spent that time deciphering what they were and how to utilize them. Allard writes that he has no idea what the vampire is up to, but he’s sure it means great suffering for the world… so Clark vows to stop Tracquer and continue to fight for good, as he’s done for aeons.

Meanwhile, the Turtles, Casey and Splinter have tracked the vampire truck to Arkham, Massachusetts, but right outside of city limits their jeep has broken down. Fortunately they’ve brought the giant Turtlebot with them, so everyone climbs on board and Don pilots the mechanical terrapin.

Back in Allard’s secret underground chamber, Max is rudely interrupted from his reading as Master Traquer and three of his vampiric underlings arrive. Unfortunately Clark is still in his healng mechanism, so the monsters grab the boy and smash the glass on the pod to unceremoniously remove Allard, who is out cold.

Pervis hears noise back where he’d left his friends and returns to investigate. The boy sees Traquer dragging Max out of the chmaber by his neck. Pervis tries to ride off to seek help, but he hits a rock and breaks the front wheel on his bicycle. As he laments his situation, he sees a loud and looming form emerging from the darkness… it’s the Turtlebot!

“Hey, kid,” Casey calls out, “We’re kinda lost! Can ya give us some directions?!”

Innsmouth, Massachusetts – The vampires are in a hideout on the wharf, inside Allard and Max are tied. Fortunately, Clark has almost healed fully at this point. Traquer announces that they are going to summon a hideous monster called Dagon to destroy mankind. As the convocation begins, the TMNT crash through a wall and a huge battle ensues. Unfortunately, the ceremony was completed and Dagon arrives – a huge tentacled beast that immediately begins grabbing vampires and eating them. Don’s robot is captured in tentacles but he blasts out of the machine before its swallowed. Casey is fighting Traquer but not doing very well… as the vampire master prepares to dine on Jones’ neck, Max stabs the monster in the back with one of Casey’s broken baseball bats and kills it.

Meanwhile, Allard is struggling with an artifact in the attempt to close the gateway that has allowed Dagon to enter our dimension. As he makes adjustments to the device, the beast grabs him. Clark tosses the artifact into the gaping maw, hoping to close the gateway from the other side. Suddenly a huge explosion rocks the building to its foundation and our heroes run for cover as the structure collapses. Once the dust has settled, Splinter sends his students to find Allard and the artifiact, but there’s no sign of either.

The next day we see Max and Pervis walking down the street. Once again Barry and his cronies show up. Barry states that they’ve got unfinished business from yesterday. Pervis tells Max to apologize, but Max refuses.

“No way!” Max shouts in defiance, “After last night, these guys are nothin’!”

So Barry punches Max in the eye, knocking him to the ground and giving him quite a shiner.

“Some thanks for saving the world!” Max bemoans.

Meanwhile, we see Casey phoning April and telling her that they’ll be home as soon as they fix the truck.

Finally, we see Clark Ashton Allard in his healing pod.