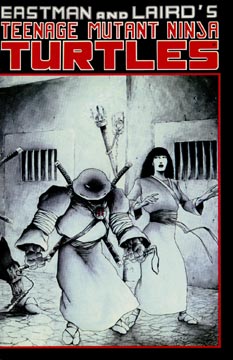 “Distractions”
The story opens back in fuedal Japanese days with Michaelangelo setting up a campfire in the woods. An old man and his two children are surprised to meet Mike, but after introductions are made, they all share supper. The man is Toshiro, his young son is named Sakai and his teenage daughter is Tai. They explain that they’re going to Kyoto to meet their cousins because it is unsafe to stay in their province. Michaelangelo tells them that he is searching for his brothers, as they were separated when they first arrived here. The family thanks Mike for his hospitality, but explain that their journey is long and so they must be off. As the people depart, Mike douses his fire and decides that he too should be on his way. Mikey then hears horses approaching at a fast clip and moves to investigate. Mike spots the family just as they’re confronted by the rider, Tachi, and his men.

Tachi screams at Lord Toshiro that he was a fool to flee and that the Daimyo has ordered his death. The lead horsemen then orders his men to kill the old man and boy, and claims the girl as his own. Before anyone moves, Michaelangelo bursts onto the scene and takes out the henchmen on horseback.

While Mike is fighting the others, Tachi scoops up Tai and tells the heroic terrapin that his interference will cost him his life. Before riding off, the man states that Tai will be his bride and he will return to kill Toshiro.

After Tachi has escaped with Tai, Lord Toshiro explains that the abductor is Daimyo Orkai’s son, and that his daughter is being forced to marry him. The marriage would end Toshiro’s rule over the realm and give Tachi complete control of the land, giving him twice as much farmland and people to exploit. Michaelangelo decides that he cannot allow this injustice to take place and sets off to rescue Tai.

Mike manages to get into the Daimyo’s encampment and rescue Tai, but he has to fight numerous battles along the way. Eventually we discover that the Daimyo is an evil sorceror. After multiple skirmishes with various adversaries, Mike is victorious in the final conflict with Tachi. Lord Toshiro arrives with an army of farmers to reclaim his throne, and he banishes the wicked Orkai from the land. Princess Tai asks Mike to stay with them, but Mikey insists that he must leave to find his brothers. The lone ninja walks off alone as a sad Princess Tai watches.

On the final page we find out that this whole story was being written by Michaelangelo in his journal. Mikey scratches his head and turns to his pet cat and asks, “Well, that’s the story so far. What do you think, Klunk – too corny?”