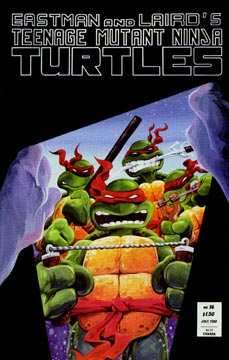 This issue was released before TMNT #15 due to scheduling problems. Mark had completely finished his issue before Peter had managed to get his pencils done on #15. Thus Kevin and Peter decided to release #16 prior to the printing #15 to alleviate the wait for a new TMNT comic.
The story begins with a little girl sitting on a box who talks to the reader. She begins by saying, “Let me tell you a story.”

The girl then enters the time machine (which is nothing more than a big white cube on the outside, but is filled with all kinds of apparatus on the inside) and engages its engines, which warp reality. “I hate this part,” she says.

Cut to the streets of a city, where a drug addict has just stolen an old lady’s purse. The woman’s little dog is in pursuit of thief, but he meets up with the Turtles before the dog can bite his ankle. The junkie throws the purse at Mike and flees. Raph admonishes Mike for blowing thier cover, but Mikey states that no one will believe a word the crook says. Raph than asks Mike how he’ll get the purse back to the lady without compromising their indentities, and that’s where the little dog comes in handy. Mikey gives the pooch the purse and the dog runs back to his master in victory.

Suddenly the time machine appears in the alley. The little girl pokes her head out and sees Leonardo, who she leaps on and hugs his neck. Leo warns the girl to mind his katanas and to be more careful who she leaps on. The girl says “You don’t know who I am yet, do you?” Leo is bewildered and goes to fetch his brothers.

The little girl sends the reader off to shop for books for about an hour. Leo and the others appear in the room cautiously, wary of any further hug attacks. The girl says that she came back to thank them, just as the time machine begins to act up. The lass quickly hugs each Turtle in thanks and gets back into the box, which warps reality once again. The box takes off and moments later a new box lands in the same spot, with a profound “Ouch!” resounding from within. The Turtles recognize the girl’s voice and wonder what’s going on.

The box opens and a head pokes out, revealing the time traveller – who no longer looks like a little girl, but a bug-eyed mutant. Everyone screams.

After brief confusion, the time traveller tells her story to the Turtles. Her father, Bobby, wanted to be in the cola business but had to give up his dreams when his wife, Manda, became pregnant. The soda business was only losing the couple money, and with a baby on the way, Bobby had to start making money to support the family. So the inventor takes a job with the Maximegamulticorp Capitalist Conglomerates Research Center, and begins working on an “intelligence boosterizer” formula. While at work, Bobby worries about the use of the concoction and his proximity to dangerous chemicals, radiation and other phenomena. His co-worker reassures him and tells him that they’ll be getting raises next week, which keeps Bobby going.

The time traveller then explains that while she was developing in her mother’s womb, she began to assimilate her parent’s thoughts and understand the world far better than her mother could. She also became aware that she was a genetic misfit, and once she was born, people would be frightened of her appearance… so when her mother finally gave birth, the traveller ran away. The mutant girl knew that her parents couldn’t cope with a super-intelligent mutant baby, and she feared what the government would do to her (dissection). So the traveller escaped the hospital and set up a secret lab of her own. She had monitored her parents lives for awhile, but the guilt of having a mutant baby had wrecked Bobby and Manda’s lives, so the traveller stopped keeping tabs on them as it was too depressing. Eventually the time traveller devised a plan – she built a time machine that would allow her to travel back in time and convince her father to not take the job from MMMCCC, thus allowing her to be born as a normal little girl.

The time traveller asks the Turtles to help her on the mission, and the guys debate the problems with disrupting the timeline. As the TMNT discuss the theoretical problems, the traveller runs off. The Turtles set off in pursuit and eventually arrive at a house. The boys barge in to find a shocked Bobby and Manda, who are speechless and immobile. The Turtles are tongue-tied at first, but thanks to some quick thinking, they pose as employees of MMMCCC and welcome Bobby to the company. Bobby and Manda remain in shock as the TMNT head out.

As the guys are descending a stairway pondering if their ruse will work, they come to the conclusion that it will, as they’ve already met the traveller in the form of a normal little girl. The guys get back to where the time machine is and are greeted by the traveller, who now looks like a mix of the little girl and her former mutant self (not a pretty sight). As the girl continues to mutate, she bids the Turtles farewell and climbs back into the box. Reality warps once again. “I hate this part!” the Turtles exclaim.

Cut to a kitchen, where we see the little girl getting some cola out of her refrigerator. She spots the reader but shows no recognition, in fact she accusses you of being a stowaway and states that you’ll have to go back as soon as possible. She then remembers that she has a test tomorrow and that she has to study – which excites her because she’s getting her normal memories back. Apparently all went well with the time travel scheme.

“Ring my bell!” the girl exclaims, “I’m turning into me! You just will not be-leev what I did today…”

The little girl pulls up a box, sits down and says “Let me tell you a story.”

What goes around comes around.

The saga continues in TMNT #22