“The Shell of the Dragon”
As the story begins, we find several criminals discussing their control over the local restaurants. Beancurd, an underling, gloats that all of the eateries in the city are now using the villains’ cut-rate spices and frozen foods when his boss, Gorko, angrily interjects that they control all but one… and Gorko wants to mend this situation. Beancurd states the he has a plan to remove this “thorn” from their garden when he’s interrupted by a creature that is caged behind the men. It frantically grasps at some spice on the table that the men are seated at. Gorko elbows the beast in the face and knocks it senseless. Another underling asks the warlord what the animal is, and Gorko explains that it was once a man named Fong, now transformed. “A casualty of eating the All Spice -choke- straight out of da can!” the mobster growls derisively.

Cut to the harbor, where the TMNT are arriving in a boat. The Turtles are hungry and a local boy agrees to take them to the best take out restaurant in the city in exchange for some eggrolls. The Turtles agree and the child leads them to Hu-Shang’s place. As the lad goes in to pick up the food, a car arrives out front and a group of punks jump out, exclaiming that this is the place that Beancurd ordered them to trash.

The hoodlums begin tagging the front window of the place as the Turtles watch with little concern – until the boy emerges from the restaurant with the food and a punk slaps him on the head, causing the kid to drop the food. Now that their ally and food have been assaulted, the Turtles leap into action and kick the gang’s collective butt. The punks pile back into their car and escape. As the vehicle zooms away we see a young man standing in the street, decked out in white, wearing shades and brandishing a hobo stick.

As the Turtles wonder what the conflict is all about, an old man comes out of the restaurant and cries over being vandalized yet again. The man in white, Chang Lee, aproaches and tells his uncle that he has come to visit. Hu-Shang tells Chang that he is pleased to see him and is grateful for his friends help, when Chang explains that the Turtles are new friends to both of them. Lee then invites the TMNT into the restaurant so they can be honored guests. The Turtles are only too happy to oblige.

The TMNT feast for an hour and offer their compliments to Lee and his Uncle “Rocky.” Lee explains that his uncle makes the healthiest food around when the doors slam open and Beancurd arrives with more thugs in tow. Hu-Shang greets the men and asks them what they want now, and the crook demands that the restaurant begin using the All Spice. Hu-Shang states that he prides himself on “serving only the finest, freshest, most wholesome foods available” and refuses. Beancurd threatens to burn the restaurant down and a fight breaks out. Chang defeats the mob and they leave, vowing vengeance.

Beancurd reports Hu-Shang’s refusal to use the All Spice to Gorko and also tells him of the strange ninjas that the old man has working for him. Gorko decides that he’ll have to hire a “true destruction machine” to take care of the trouble-makers.

We then cut to an imposing building and find within it a huge man named Buff, who is beginning a work-out while dozens of admirers watch him. Once his training is finished, Buff lounges as his female admirers fawn over him. Buff orders his lunch, but much to the behemoth’s dismay, the cook brings him a cooked turtle. Buff freaks out and has a flashback that reveals how he was traumatized by turtles as a baby. Buff screams “I hate turtles!” and smashes the plate out of the server’s hands and then destroys a wall in a fit of rage.

Meanwhile, the TMNT have left the restaurant and head to their hotel, which turns out to be a dive. In the morning the Turtles decide to head over to Hu-Shang’s place for a bite to eat, but when they arrive they find that the eatery has been set on fire. Chang is there and states that it had to have been Beancurd who set the fire. Chang had taken his Uncle to visit his brother for a few days, and when he got back he found the fire blazing. Chang and the Turtles put out the flames and rebuild the restaurant for Hu-Shang. After their work is done, the boys head out to repay Gorko for his treachery.

The Turtles and Chang arrive at Gorko’s place and kick the shell out of all those who oppose them. As Chang is facing off with Gorko, Buff arrives and immediately bursts into aother fit of rage when he spots the Turtles. As the TMNT prepare to fight the enraged hulk, Chang stops them and tells them this is a family matter and he must settle the score himself. Lee fights Buff and manages to win, although it’s a hard won victory. The Turtles grab Beancurd and Gorko and tie them up. The two criminals beg for mercy and Leo says, “We’ve got plans for you slimes!”

On the final page of the tale, we see the Turtles and Chang dining with Hu-Shang at his restaurant. Buff is now the busboy, Gorko is a walking billboard advertising the restaurant and Beancurd is the “mop master.” 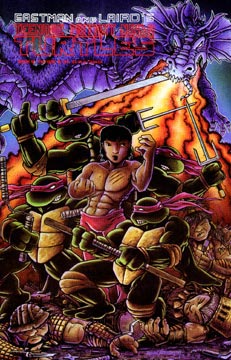 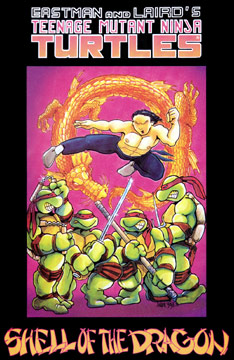 Note: This reprint was printed in full color