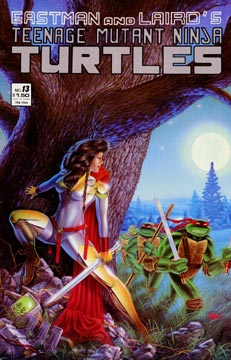 The Turtles are planning on camping in an old abandoned factory by a lake when they notice a shooting star falling from the sky – heading straight at the decrepit building! Donatello barely escapes the factory in time, as the “star” destroys the factory and crashes into the lake beyond.
As the guys watch, a huge robot emerges out of the water. The machine raises its hand and Raphael goes ninja on it, breaking the ‘bot wide open to reveal an unconscious woman within. The Turtles carry her to safety.

Meanwhile, we see a ship flying through outer space. Inside are several strange alien creatures who are being lead by an “evil queen.” The woman chastises her crew for failing to destroy her adversary and decides that they’ll have to head to the Earth to finish the job. Apparently the “queen” needs to remove her opponent to ensure victory in an election.

Back on terra firma, the Turtles are practicing their martial arts as the alien woman awakes. She mistakes the TMNT for underlings of Moriah (the evil queen) and attacks Don. Leonardo calms Raph down before the violence escalates and the lady, whose name is Jhanna, tells her tale. It seems that Jhanna has already won the election via a vote on her homeworld, but tradition dictates that she must best her opponent in physical combat to assume the throne. However, while Jhanna was traveling to the predetermined planet to do battle, Moriah ambushed her. If Moriah is able to kill Jhanna, the evil queen will be allowed to maintain her position, so Moriah is cheating in the attempt to maintain her crown.

Shortly thereafter, Moriah arrives on Earth with quite a few deadly allies to help her win the fight. After an extended battle, the TMNT take out the horde of strange henchmen and Jhanna finally defeats her foe in hand to hand combat. Rather than killing Moriah, Jhanna brands her face and stalks off.

Our heroes spend the evening camping out under the stars, and in the early morning a rescue ship arrives for Jhanna. Before she departs and the Turtles awake, Jhanna cuts a lock of her hair and leaves it for Donatello. The boys wake up just as April and Casey arrive in their car to pick them up.

April asks, “So! Did you do anything fun?”

“Yeah,” Raph replies, “We beat up a bunch of nasty aliens.”

April says “Let’s go, gang” and everyone piles into Casey’s ’57 Chevy, save for Donatello, who looks wistfully up to the sky.