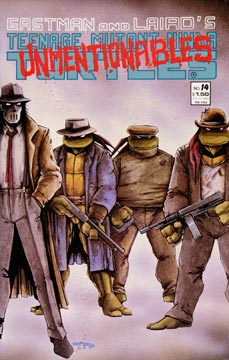 “The Unmentionables”
Casey Jones is patrolling the sleepy streets of Northampton, Massachusetts looking for some crimes to prevent. Northampton is nothing like New York City, however, so the mighty Casey is occupying his spare time as a vigilante by narrating events as if he were Mike Hammer. Jones is a little homesick for the Big Apple, but he’s also reminiscing about the good times he had in this town as a kid with his cousin Sid. As Casey walks familiar ground, he passes by Louie’s Variety store and is stunned by what he sees… the brass cow that once served as a rooftop landmark for the business has been stolen! Jones is enraged and gets to work on the case right away.

As Casey interviews Louie for details, a local cop walks in and assures the shopkeeper that the theft was probably just a college prank and that the cow will show up soon. Casey gets angry about the police officer’s blasé attitude, which only angers the cop, who tells Jones to “Butt out – pronto!” Casey storms off, vowing to find the cow.

The following morning, we find April frantically getting ready for work and asking where Casey is. Just then Casey walks through the door, icicles hanging from his hat and chin. Jones moans that he’s been out all night looking for “the great cow” and collapses. Fortunately it’s nothing serious, and Casey tries to explain about the theft, but April is running late and hurries off to work.

Cut to the Blue Bonnet Diner, where April is waiting tables. As Ms. O’Neil is going through her stubs, she overhears two men plotting something about a cow. One of the men slaps the other and tells him that if he has any info he should leave it at the front desk of Hotel Northampton, room 213. April is suspicious and tries to remember where she heard about a cow earlier in the day when she sees the newspaper headlines – the top story is about the missing cow!

Back at the farm house, Casey is trying to get the disinterested Turtles to help him when April calls. O’Neil tells Jones about the conversation she overheard, but unfortunately the man who slapped his partner overhears April’s phone conversation and becomes alarmed. Casey takes down the hotel information and slams the phone down in his excitement over having a lead. April is unhappy because she wanted to go along.

Casey gets to the hotel and tries to get the woman at the front desk to tell him who’s in room 213, but all he manages to do is get thrown out of the joint. As Jones sits on the stoop outside wondering what to do next, April arrives. April thinks she can have better luck getting the information, and she goes inside. As Fate would have it, just as O’Neil gets into the lobby, the slapping man (whose name is Howard) walks through with another fellow. April overhears the two making plans. Apparently Howard works for the older Texan man and they’re making elaborate plans for a graduation party.

Later that night, April, Casey and the TMNT arrive at the parking lot of the Hotel Northampton. Casey has asked the Turtles to search room 213, and while the guys aren’t happy about doing it, they agree. Jones and O’Neil crash the posh graduation party inside.

The Turtles find a bunch of paperwork and photographs of the Texan, Howard and the Brass Cow – however, they also discover they’re in room 215 – the wrong place!

As April is prowling the party looking for clues, she’s spotted by Howard. O’Neil darts out into the lobby, where she’s accosted by three men, Mikal Smengie and his brothers Luka and Luka (a Bob Newhart joke for those of you old enough to remember his show). Unfortunately April has stumbled into a rendezvous between the Smengie Brothers and the Texan… a ten million dollar meeting that they all want to keep secret. Howard gags April and tells the Brothers to take her with them. Howard also give Mikal a briefcase full of money and an address. The Texan complains about loose ends and Howard says that he’ll take care of things.

Back in the hotel room, the TMNT decide that this case is too complicated and the police need to be notified. As they head out, they see April being kidnapped. The guys scramble down to the parking lot, but they’re too late to stop the van holding their friend from escaping. The Turtles pile into their truck and head off to chase the van.

Casey goes into a restroom inside the hotel to gather his thoughts. He sits on top of a toilet in an empty stall as two guys come in. Jones overhears the two talking about a “prize cow” at Norman Whitty’s place on Route 116. After the men leave, Casey dashes out to the parking lot to get his truck so he can investigate… except the truck is gone! Undaunted, Casey hails a cab.

Meanwhile the Turtles have followed the van to an old garage in the woods. Inside are the three brothers carrying weapons, a bound April and a well wrapped cow. As April berates her captors and warns them that she has friends, the Turtles burst in and kick the shell outta the Smengies. Once the Brothers are tied to a post, the Turtles interrogate them. The men talk to one another in Slovakian, which angers Raph and he threatens them. Under duress, Mikal explains that the brass cow was stolen from his family by their other brother Louie before the revolution. They’ve returned to steal the brass cow back and to sell it to Mr. Cudworth, who collects antique cows. April finds the story dubious, as ten million dollars is involved. Raph gets even angrier and decides to bash the cow to bits. Mikal then panics and exclaims that the cow is solid gold, and that they had stolen it before the revolution so that the new dictator wouldn’t be able to use its wealth. They now want to sell it and share the wealth with their people.

Leo is suspicious, but he wants to see how things will play out before calling the police. In particular, Leonardo is interested in the Texan’s role in these events. Leo hatches a plan that will allow them to get the real story.

Back at the hotel, the Texan receives a phone call from Leonardo, who tells the rich man that the deal goes down tonight and that they want an additional 5 million dollars. This does not please the Texan but he gathers up his forces and heads out.

Meanwhile, Casey has arrived at Norman’s place on Route 116 in the taxi. Casey is jubilate about finding the cow and heads into the barn with glee – only to discover that the cow inside is real! Just then, Norman shows up with a shotgun and yells at Casey to get away from his prize winning heifer. Jones fast talks his way out of things and piles back into the cab, ordering the very unhappy driver to take him back to the hotel.

Back at the Smengie garage, the Turtles are all decked out in trench coats and firearms, awaiting their meeting with the Texan. The men show up and the Turtles demand the money. Howard asks where the Smengie Brothers are and the Texan demands to see the cow. Mike unwraps the cow only to reveal that it’s a fake! As tempers flare, the Smengies crash through the garage door in a flatbed truck, with the real “brass” cow chained to the bed. A short fire fight erupts between the Texan’s men and the Turtles, but the millionaire and his henchmen take off to chase the Smengies. The Turtles pile into their own truck and bolt out in hot pursuit.

As the Smengie’s truck barrels down the road, they pass Casey’s cab. Jones grabs the wheel of the car and spins it around. The driver is scared to death and Casey screams at him to “follow that cow!” The cab gains on the truck and Casey jumps out onto the hood of the taxi and leaps onto the cow. Jones causes Mikal to crash the vehicle into a ditch and shouts, “You pukes are under arrest!”

Just then the Texan shows up, and Howard yells, “Correction! You’re all under arrest!” As the millionaire wonders what’s going on, Howard explains that he’s an undercover secret service agent. It turns out that the Texan (whose name isn’t Cudworth, it’s actually Emil Bruzeniak) is in the business of buying and selling stolen national treasures. Howard has been working for Bruzeniak for two years, waiting to build enough evidence to bust him. Howard calls in his backup and two helicopters appear. The TMNT and April arrive on the scene. The Turtles bail out of the truck as April drives up to see what’s going on.

When April arrives, Howard wants to hear why she and Casey are involved in the case. Jones explains everything in long detail and Howard demands to talk to the four men who helped April escape. April tells the secret agent that her allies wish to remain anonymous and pleads that they all be let go, as everything turned out fine. The agent begrudgingly admits that Casey and April helped solve the case and agrees to forget about their friends’ involvement, filing it under “unmentionables.” Casey and April walk off arm in arm as the criminals are lead off in handcuffs.

The Turtles have witnessed everything from the safety of the woods.