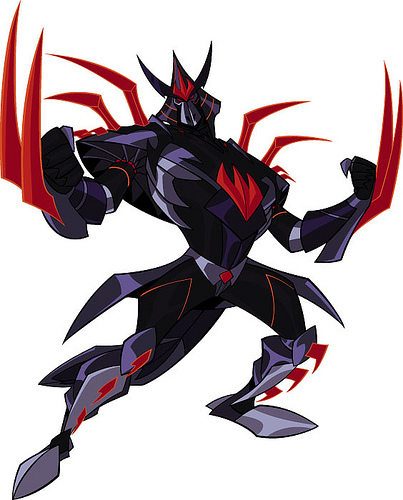 The Cyber Shredder is a cybernetic engram of the Utrom ShredderCh’rell in Back to the Sewer. Though he is essentialy a copy of Ch’rell, he at first seems to be unwilling to work with his original self or the Tengu Shredder, as the three of them are eventually in combat. Though they did eventually join forces together to attack theTurtles and Splinter.

As a contingency plan, Ch’rell made a cybernetic engram copy of himself with a Shredder design, just in case of his corporeal death. This engram was locked in a data vault until Viral, who had came to the present, tried to access it, triggering its defenses and reformatted her into a vessel for the Cyber Shredder. Prior to her “demise”, however, Viral took [Turtles]], Splinter and Serling to a point in the near future when Cyber-Shredder battles the other thwo Shredders in a war among the Foot Clan. He is able to slice into Serling and the Utrom Shredder’s armor. He eventually joins force with the other two Shredder’s to attack Splinter and the Turtles. He ending up getting blasted by Don, when he gets inside Serling’sTurtle X mode.Tempus Fugit
After his creation, Cyber Shredder contacted Khan, a devoted Foot operative to have his aid in finding a way to leave cyberspace.Karate Schooled The Shredder encountered the Turtles in the cyber realm when they were looking for pieces of Splinter. He was unaware of his corporeal form’s exile. When they escaped him, he saw that they had a cyber portal, which would be his ticket out of cyber space. Something Wicked

When Hun and his Purple Dragons began raiding Foot treasure vaults with powerful technologies, Shredder became suspicious, as Hun couldn’t come up with such things on his own. He established a link at Dragon HQ and learned that Baxter Stockman, in a new cyborg body, has been hacking the Foot database. seeing the body as his ticket out, Shredder remotely took over Stockman’s body and made a few adjustments to resemble his armor in the real world. Augmenting Stockman’s body with power gauntlets, Shredder made a mess of Dragon HQ and was very glad when the Turtles, excluding Don, showed up. Stockman ejected his head and made an alliance with the Turtles to disrupt the Shredder’s control. Hacking Stockman

Shredder later formulated a plan to make the Turtles serve him. While they were in cyberspace, locating a cluster of Splinter’s data bits, he sent a virus to brainwash them into thinking that they were his loyal Foot Ninja, and tasked them with taking down the Purple Dragons. Casey, April and Serling were able to awaken their latent memories, restoring them to their true selves, but the Shredder had extracted enough information from them to create his own cyber portal into reality Identity Crisis. Once the portal was complete on both ends, he tested it using animals from a nature website, sending them into reality so that he could tune it properly. Each time an animal came out, it mutated, as it was still part data, not only matter. When the Shredder had sent in a copy of Khan, it proved to be entirely material, confirming that the portal was stable. The Shredder then began his upload into the real world. Luckily, Don sabotaged his cyber portal, making him partially digital to be dedigitized by the dart blasters. He then reappeared in cyberspace, vowing to make his enemies part of his exodus. Web Wranglers

The Shredder later escaped by tricking the turtles into almost building the portal for him, despite the turtles finding out about it before Donatello finished the portal, Shredder still managed to escape Virtual Reality Check. Using his knowledge of cyberspace, the Shredder hacked New York’s computer mainframe to control everything in the city. When the Turtles caught on, he attempted to stop them but was unsuccessful in preventing them from reaching his location. They managed to defeat him by electrocuting him, but his core personality was able to escape into cyberspace. City Under Siege

In the episode “Wedding Bells and Bytes”, the Cyber Shredder returned. He had infected one of Splinter’s databytes, using it as a tracking beacon; when Donatello managed to reconstitute Splinter, the Cyber Shredder received the information to the process which allowed him to reduplicate the process on himself. Fully restored to material form, he, Khan and the Foot Clan attacked April and Casey’s wedding, but got destroyed by Don andSerling with the same decompiling blast which had destroyed Viral.