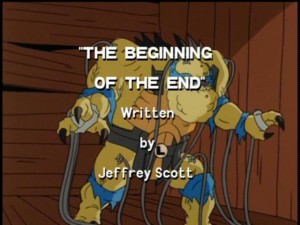 SYNOPSIS:
Leonardo is nine feet tall and locked up in a cage. Eventually he de-mutates and does not remember anything. Donatello tests the vortex crystal ray on Leonardo. Donny thinks it works, but shortly thereafter Leonardo’s feet start glowing.
At the Dreggnaut, Dregg commands Mung to take over a power plant so he can have a source of plutonium.
Leonardo mutates again and goes roaring out of the lair with the other Turtles in pursuit. He winds up at a hockey stadium during a game.
April is out looking for a lead for a new storyline when she decides to find out more about a chop-shop ring in the City.
The Turtles chase Leonardo to some train tracks at the same time that Dregg appears in his shuttle. One of Dregg’s men hits Leonardo with a beam of light that solidifies into a crystal cylinder with Leonardo inside. Dregg’s shuttle takes off.
April winds up in the middle of Dregg’s evil plots and again gets captured by his men. Dregg bombards mutant Leonardo with a powerful energy beam. April thinks the beam will kill Leonardo but instead it de-mutates him.
The Turtles battle Dregg and Mung and the bat-men and keep them from taking off with Leonardo.