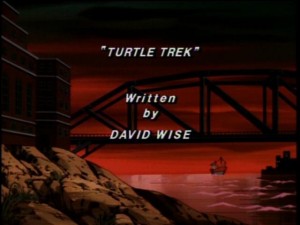 SYNOPSIS:
Despite interference from the Turtles, Shredder, Bebop, and Rocksteady successfully install an ENERGY TRANSMITTER inside the Power Relay Station and escape unharmed.
Back at the lair, the Turtles argue as to whose fault it might be that Shredder and company got away again! Splinter suggests that they spend less time considering “how to get Shredder” and more time “doing good things”, which confuses the Turtles.
Meanwhile, over at the Hall of Science, Krang activates his new DIMENSIONAL PORTAL, thanks to Shredder’s installation of the Energy Transmitter at the Power Relay Station, giving him access to Dimension X.
After Donatello’s equipment registers a power surge emanating from the Hall of Science, they set out to investigate – only to find the place empty and the Dimensional Portal turned on. The Turtles surmise that Krang Shredder, Bebop, and Rocksteady have journeyed to Dimension X but they are not sure why.
But before they can ponder any more as to the reason why, they hear a voice crying for help. That voice belongs to an alien from Dimension X named GARGON. He claims that Krang had him abducted from Dimension X and used him to test a new experimental mutagen. Feeling sorry for Gargon, the Turtles free him and the alien agrees to help them find Shredder in Dimension X.
But once they arrive there, it seems as if Gargon is leading them on a wild goose chase – going from planet to planet, being attacked by aliens and monsters, being dropped into a middle of a war, but never finding Shredder and Krang.
Eventually it’s revealed that Gargon has actually led them into a trap. Shredder arrives in the Technodrome and rewards Gargon by using his RETRO-MUTAGEN CANNON and transforms Gargon back to his normal self. Gargon apologizes to the Turtles and pleads for their forgiveness.
But just as Shredder is about to transform the TMNT back into real Turtles so that he may be rid of them at last, Gargon saves them, allowing the Turtles to destroy the Technodrome’s engines, and return to Earth, via the Dimensional Portal, trapping Shredder, Krang, Bebop and Rocksteady in Dimension X for good (?)