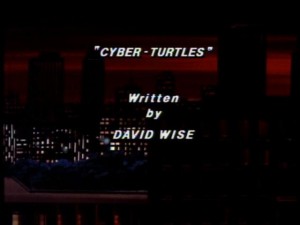 SYNOPSIS:
While investigating the theft of a rare telescope, the Astro-Viewer, the Turtles discover odd tracks leading away from the National Space Exploration Center.
Meanwhile, at the Hall of Science, having installed the Astro-Viewer in a vain attempt to create a dimensional portal, Krang discovers an alien StarFighter flying closely past Earth. He is able to break into their transmission and learns that they have recently defeated their enemies and now have possession of the Firestar, which will make them the undisputed masters of the universe.
Krang is excited by this piece of information. Until now, he had always thought that the Firestar was only a legend. It seems that the Firestar contains the power of a thousand suns. Krang believes it is his destiny to rule the cosmos, not just those creatures.
Krang brings the alien StarFighter down with his lasers. Moments later, Shredder, Bebop and Rocksteady arrive, stun Commander Korak and his comrades of the Glaxxon Federation, steal the FireStar and head back to the Hall of Science.
April and the Turtles race to the crash site only to be confronted by Commander Korak and his fellow Glaxxons, who think that they have taken the FireStar.
After being captured, the Turtles try to explain that they only came to make sure that nobody was hurt and that they are friends. Commander Korak explains that the Glaxxons have no friends and orders them thrown into a cell.
The Glaxxons set out in search of the FireStar and April contacts the one person she can always count on when the Turtles are in trouble: CASEY JONES!
Shredder delivers the FireStar to a very excited Krang. The Glaxxons fear that someone is jamming their sensors, as they cannot locate the FireStar. They head for the City determined to destroy the world if they have to.
The Turtles escape from their cell and steal four Cyber suits. They become the Cyber Turtles and follow the Glaxxons to the City. When they meet up a battle ensues. April and Casey sneak into the Hall of Science and steal back the FireStar. The Glaxxons surrender.