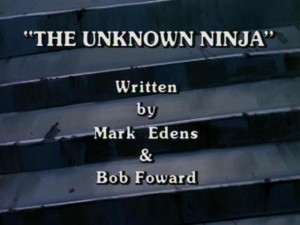 SYNOPSIS:
Raphael is reviewing videotape of past battles utilizing Donatello’s new TurtleCam when he notices someone lurking within the shadows on the tapes. Raph announces that he has seen that same face at the sight of their last two or three missions. The Turtles are curious as to why someone would be following them and decide to hit the streets to find this mysterious watcher. Meanwhile, from out in space, an alien warlord named DREGG sends his TECHNOGANGSTERS to Earth. The alien mob is led by Dregg’s second-in-command, HI-TECH. The gangsters plan to loot the Earth of all it’s gold. Apparently gold is the element necessary for Dregg’s “master plan”.
So while the Turtles are still cruising the streets, the TechnoGangsters’ spacecraft enters the Earth’s atmosphere with laser guns blasting at the Federal Reserve Building.
The Turtles quickly leap into action, but soon find themselves in a pickle. Suddenly the mysterious watcher arrives on his motorcycle and helps to turn the tide. Unfortunately, he ultimately ends up being more of a hindrance then a help, as the TechnoGangsters escape. But before they can learn his identity – he has escaped as well.
Back at the lair, the TMNT have another problem to contend with as Donatello informs them that the mutagen is proving to be unstable and he has no idea what it effect it may ultimately have on them.
But before he can list some of the errant possibilities, the Intruder Alarm sounds and they rush off into the sewers – only to discover the mysterious watcher lurking about.
After deflecting some impressive martial arts moves, the Turtles learn that the watcher is a kid named CARTER and he is seeking the famous sensei, Hamato Yoshi, so that he can learn the technique of the Foot Clan.
Much to the Turtles surprise, Splinter agrees to take Carter on as a student, but only if Carter agrees to follow the “Code of Ninja Honor” – no matter how difficult it may be.
Back on board the DREGGNAUGHT, Dregg takes his recent failure in stride and revises his master plan. This time he intends to use the “Earthlings own primitive technology” against them.
Meanwhile at the Copcor Building, April is witnessing the unveiling of the future of law enforcement – THE INTIMADATORS — robotic cops, designed to detect criminal intent. But thanks to Dregg, these robots are out for blood.
April contacts the Turtles who leave Carter behind with strict instructions NOT to touch anything in Donatello’s lab — especially the unstable mutagen! The TMNT then rush across town to the CopCor Building.
While wearing Donatello’s TurtleCam, Michaelangelo broadcasts the images back to their lair, where Carter is able to see first hand the Turtles in action — from their POV.
But after a serious butt-kicking from the Intimidators, the screen goes black. Fearing the worst, Carter decides that the Turtles need his help. As he rushes out of Donatello’s lab, he inadvertently, and unknowingly, spills some of the unstable mutagen onto his hand. But at the CopCor Building, once again, Carter’s efforts seem to cause more trouble for the Turtles than relieve them. And to make matters worse, Dregg has finally arrived on Earth via his gigantic floating platform in his bid to conquer our world.
Another battle ensues with Dregg, Hi-Tech and other assorted TechnoGangsters joining the fray between the Turtles and the Intimidators.
But Hi-Tech and the TechnoGangsters had not counted on the tenacity of the Turtles and are finding it difficult to defeat them.
Dregg decides that to make the Turtles tow the line, he needs a hostage… and Carter is just what the doctor ordered.
So while Dregg returns to the Federal Reserve Building to finish stealing the gold, Carter is locked in a sealed metal hold and clamped into a mechanical claw. The kid is angry at himself for not being effective in his efforts to help the Turtles, and then he suddenly mutates (thanks to the spill back in Donatello’s lab) into a giant bio-mechanical, metallic-skinned ninja.
Meanwhile, the Turtles have destroyed one Intimidator and Donatello has reprogrammed the other to help them defeat Dregg and his TechnoGangsters.
Back at the Federal Reserve Building, the Turtles destroy Dregg’s Flying Platform and with the help of the Metal-Mutant Carter, defeat Dregg, causing him to return to his Dreggnaught claiming to seek revenge.
Unfortunately, the Turtles believe that Carter perished during the fire fight and are relieved when he shows up at the lair the next day. Now all they have to do is figure out who was the “mystery mutant” that saved them.