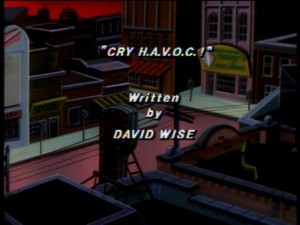 SYNOPSIS:
While foiling the robbery of a jewelry store by three MASKED THIEVES, the Turtles find themselves arrested for the same crime, only to be ‘rescued” by fellow mutants: AMOK and OVERDRIVE.
Meanwhile, Burne Thompson reports on the mysterious disappearances of people throughout The City and suggests that somehow the Turtles must be responsible.
While running away from the cops, the Turtles stumble upon another crime in progress at the Historical Museum, where they successfully thwart two would-be thieves, only to have Michelangelo rescued by RAPTOR, another fellow mutant, as he tumbled off the roof of the, and over the side of the, building.
Down on the street, the Turtles are introduced to Raptor, Amok, and OverDrive, who announce their affiliation with H.A.V.O.C. [Highly Advanced Variety of Creatures] and invite them to join their organization.
When they arrive at H.A.V.O.C headquarters, located somewhere under the waterfront, they are immediately introduced to TITANUS, the leader, who offers them sanctuary from the narrow-minded humans.
The Turtles are split on their emotions. Raphael and Donatello are fed up with being the bad guys, while Leonardo and Michelangelo think that the H.A.V.O.C. organization “wears funny pants” and should be investigated. The Turtles literally go their separate ways.
So while Leonardo and Michelangelo investigate the mysterious break-ins at science labs all over the City, Raphael and Donatello are invited to inspect the H.A.V.O.C. headquarters while Titanus and the other mutants go to Channel Six to tape a pro-mutant rebuttal. But during Raphael and Donatello’s “inspection”, they soon learn that H.A.V.O.C. doesn’t protect mutants — it creates them!
Meanwhile, Titanus and company have kidnapped April and Burne, as well as, Channel Six’s “transmitter”, and Leonardo and Michelangelo have learn the true nature of the H.A.V.O.C mutants.
Back at the “mutant palace”, Burne and April escape and rescue Raphael and Donatello, who are joined moments later by Leonardo and Michelangelo as they, together again, destroy Titanus, MUTANT GENERATOR, a device [utilizing the Channel Six transmitter] designed to turn the city’s populace into mutants.
But while the Mutant Generator is no longer, Titanus and his mutants are still a threat to the City.