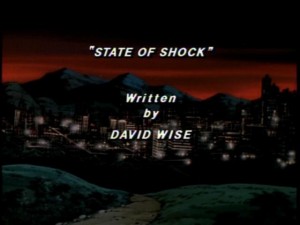 SYNOPSIS:
After defeating a mysterious group of ninjas at the Emeryville Power Station, the Turtles decode part of a map that they were able to liberate from the would-be thieves. Unfortunately, the only words they can make out are: “EMERYVILLE” and “GREEN POWER”.
Meanwhile, Vernon at Channel Six News continues to report that it is those “wretched” Turtles who are responsible for all the ninja crime occurring throughout the City.
The Turtles rush into action. But before they can make it out of the sewers, they are attacked by Colonel Wesley Knight of the U.S. Armed Forces and his elite group of soldiers, a special unit created to hunt down the TMNT. However, the Turtles escape, proving to be more than Colonel Knight had expected. As they make their getaway, the TMNT see the name: DARK WATER stenciled on Colonel Knight’s hi-tech equipment.
April tells the Turtles that Dark Water is a top secret organization, training top commandos and creating super hi-tech military equipment. The TMNT ask her to continue checking them out while they pursue the mysterious ninjas who have just broken into the Green Power building.
The Turtles follow the ninjas to an abandoned aircraft hangar and spy the ninjas leader, a character known as Megavolt. The TMNT realize that he is too powerful to be defeated and decide to try a new strategy, they waltz into his lair and volunteer to join his ranks. He accepts their enlistment.
The Turtles and MegaVolt’s ninjas break into the D W Furniture store. It seems that in the back room is an unguarded hi-tech lab holding a highly concentrated form of energy.
The Turtles do not like what they are doing but they realize that this is the best way to learn what MegaVolt is up to.
When they exit the building the are confronted, not only by Colonel Knight and his troops but by April and her mini-cam. April has captured it all on tape, the Turtles are criminals!
Back in MegaVolt’s secret hideout, he reveals that his name is Alex Winter. He uses the highly concentrated form of energy and transforms himself into a giant electrified robotic insect and heads into the City.
The Turtles have just been arrested by Colonel Knight. They try to convince him that they are innocent and that Alex Winter/MegaVolt is the guilty party. A soldier tells them that Alex Winter was a hero and the greatest agent Dark Water has ever had.
Meanwhile, April gets a hold of some secret documents and manages to convince the Colonel of the Turtles innocence.
Together they defeat MegaVolt.