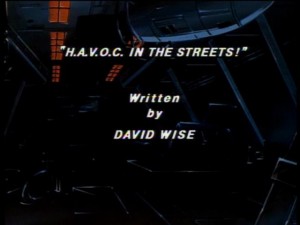 SYNOPSIS:
Titanus sends of couple of his H.A.V.O.C. mutants to bust into the Aerospace Plant and steal some much needed equipment. Only problem is that the Turtles were waiting for them.
After a fight, the mutants “beat feet” and the Turtles are left scratching their heads wondering what the mutants were after. Leonardo, Raphael, and Donatello also berate Michaelangelo – maybe if he hadn’t been goofing off, the mutants might not have escaped.
Back at H.A.V.O.C. headquarters, during our exposition scene, Titanus explains that he has finally located his missing FLUX TRANSFORMER, the one thing that will make the mutants “masters of time and space travel”, at a heavily fortified military base. And the only way he can get it, is by building his SKY PLATFORM. And the only way he can build his SkyPlatform is by distracting the Turtles long enough so that his mutants can obtain the required parts.
To this end, Titanus springs a CON from prison (thanks to the Turtles who put him there in the first place), turns the con into a mutant now known as SYNAPSE, a creature of pure energy, and sics him onto the Turtles.
Back at the lair, Donatello logs onto his computer to investigate the Aerospace Plant to see if he can learn what the mutants might have been after, only to have Synapse come bursting out of his computer to attack the Turtles.
With the Turtles busy being chased by Synapse, Titanus is able to successfully build his SkyPlatform. But once again, Michelangelo is “distracted”, and his brother Turtles are left to deal with Synapse by themselves.
Over at Channel Six, Synapse is terrorizing April, Vernon, Burne and the other employees as he systematically trashes the news station.
While Leonardo, Donatello, and Raphael pursue Synapse across town, Michelangelo returns to the scene of the original crime where he spies Titanus and company, building their SkyPlatform, and is caught in the “peeping-tom” act.
After Leonardo, Donatello, and Raphael finally defeat Synapse by sending him into outerspace where he will “ride the airwaves” for eternity, they unite with Michelangelo to stop Titanus and his mutants.
On board the SkyPlatform, the Turtles engage the mutants into a firefight in the engine room, causing the massive ship to malfunction and crash, but not before Titanus and his fellow H.A.V.O.C. members escape aboard a shuttle.