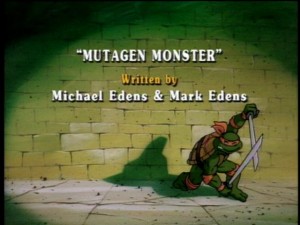 SYNOPSIS:
In an attempt to hijack two separate trains carrying the ingredients needed to make mutagen, Rocksteady and Bebop cause a head-on collision, resulting in the spillage of both chemicals in the city’s train yard.

While April reports live from the scene, the Turtles arrive to warn her of the danger – but it’s too late. Two bulls in a nearby stockyard have drunk from water contaminated by the chemical spill, causing them to mutate into one giant three-legged, multi-horned and very angry bull!

Back at the Turtles’ lair, the TMNT and Splinter are convinced that the giant bull’s mutant form is unstable. Our heroes think that they can reverse the effect if they can lure the animal to the local university, where there is an atom smasher in the science bulding. Donatello thinks that he can alter the smasher so that it will break down mutant molecules.

Meanwhile, Krang has developed a nose ring and remote control device that Shredder will need to harness the giant bull when they return to Earth and track down the beast. But, as always, Shredder is defeated by the Turtles as Donatello’s plan is a success and the giant bull reverts back not to two bulls, but to four bulls!