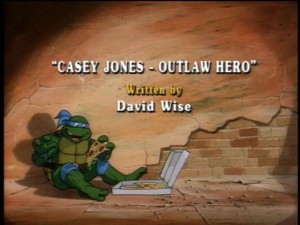 SYNOPSIS:
A self-appointed vigilante, wearing a hockey mask and named Casey Jones, is striking fear in the hearts of the city’s criminals. However, the legal system feels that this same vigilante is violating the civil rights of said criminals, therefore, the police, who believe that the Turtles are responsible, issue an All Points Bulletin. Mr. Thompson calls April at her apartment at five in the morning to assign her the story – she accepts, but only to prove the Turtles’ innocence.

The Turtles have also had their own run-in with the vigilante and, realizing how easy it will be for people to confuse him with them, elect to try and stop him.

Meanwhile, Krang has developed an army of tiny mechanical insects designed to infiltrate the city’s machinery, thereby giving the alien access to control everything.

Before the TMNT can continue their search for Casey Jones, Rocksteady and Bebop unleash hundreds of the tiny mechanical insects that take control of every machine/appliance in the city. The Turtles get busy fending off these mechanical monsters, but are soon overwhelmed. It looks like it’s “curtains” for the TMNT when Casey Jones comes along and rescues them. The masked vigilante hates all lawbreakers – even mechanical ones! Casey teams up with the Turtles to hunt Shredder who, the Turtles are convinced, is behind this heinous act.