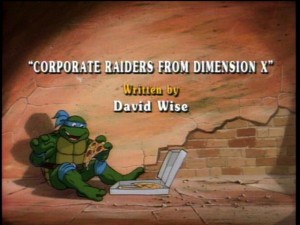 SYNOPSIS:
All over the city, high ranking corporate executives are being kidnapped by men in business suits, but the Turtles don’t get involved until they learn that one of these corporations is the world’s largest suppliers of pizza. The TMNT charge into action by staking the T.I.H.C. (THE INCREDIBLY HUGE CORPORATION) which has yet to be “hit.” The Turtles do not have long to wait. Within moments, a black limousine pulls up in front of the TIHC Headquarters and from within it disembark four men in suits carrying laser rifles. The Turtles try to stop them, but are thwarted by their laser blasts. However, one of the Turtles was able to recover a briefcase belonging to one of the businessmen. When opened, it reveals documents with the name Octopus Inc.

The Turtles recruit Casey Jones to infiltrate the Headquarters of Octopus Inc. so that they will have a better understanding of what they are up against, but while staking out the T.I.B.D. (THE ITTY BITTY CORPORATION) and waiting to hear from Casey, another black limousine pulls up and unloads men in suits with laser guns. The TMNT try to stop them. Donatello throws water on the businessmen causing them to snap out of their trances and they tell the Turtles that they were kidnapped by Octopus Inc. and brainwashed to commit crimes. The TMNT rush back to Octopus Inc., rescue Casey and storm the President’s office only to encounter Shredder, who has them tied up and thrown into a broom closet with the real president of Octopus Inc., Octavious Ogilvy, to await the “Grand Arising” – the raising of the Technodrome in the old Octopus Stadium.

The Turtles manage to free themselves, and with the help of Mr. Ogilvy, get to the basement of the stadium where they alter the wiring and plumbing, so rather than have the Technodrome arise, a giant Octopus arises, spraying the entire stadium with water. Every zombied businessman returns to his senses. Shredder realizes that the jig is up and beats feet.