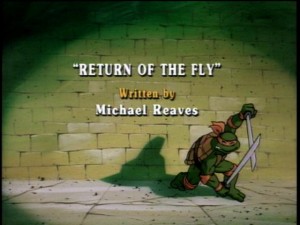 SYNOPSIS:
Noticing that the Technodrome’s ballast tanks are low, Krang decides to take the Technodrome closer to the surface so that it can siphon off water from an underground reservoir. Meanwhile, Donatello has built a device that will track the Technodrome’s movements. No sooner is he done than the Technodrome is on the move. Observing the action of both the Turtles and Shredder and company is none other than Baxter Stockman/The Fly, who has recently returned to the current dimension and is desperate to enact his revenge on both Shredder and the Turtles.

The Turtles, along with April, arrive at the underground water tank before Shredder, and while they prepare for him, April is kidnapped by Baxter Stockman/The Fly. After a minor skirmish with Shredder, Rocksteady and Bebop, the Turtles begin their rescue attempt of April, only to encounter the Rat King deep within the city’s sewer system. He agrees to help them find April. The Turtles are not sure whether they can trust him or not, but have few other options.

Meanwhile, Baxter Stockman/The Fly encounters Shredder and, once again, is duped into believing that the Turtles are his real enemies – not Shredder. He agrees to help Shredder destroy the Turtles in exchange for making him human again.

Elsewhere in the sewers, the Rat King makes good on his word and leads the Turtles to April. When they turn to thank him, he is gone. However, in his place is Shredder, Rocksteady, Bebop and Baxter Stockman/The Fly. Shredder orders Rocksteady and Bebop to “freeze dry” them but Baxter wants to gas them. The Turtles and April falls to ground unconscious as Baxter warns Shredder that they should leave before the gas takes affect on them.

No sooner have they departed, then Michaelangelo uses what little strength he has left to turn off the gas. Fully recovered, they all set out after Shredder and Baxter Stockman/The Fly

Back at the reservoir, Rocksteady and Bebop, unable to control their anger with each other, begin blasting their freeze guns at each other, causing the water in the tank to turn to ice, thus causing total malfunction. It seems that Rocksteady and Bebop have done the Turtles work for them. By the time the Turtles arrive, they merely have to escape exploding ice. Shredder and Krang have been foiled again. This time by their own men.