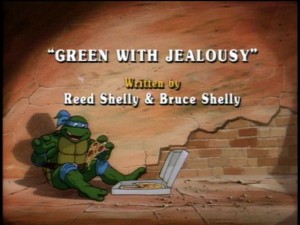 SYNOPSIS:
Krang’s latest scheme to repower the Technodrome, as it sits miles below the Earth’s surface, is to drain the nuclear energy from a USN sub that just happens to be docked in the local harbor. And to ensure that the Turtles will not be meddling with them, Krang creates a love potion designed to make them fall in love with the same woman and fight amongst themselves with jealousy.

Rocksteady and Bebop are sent up to the surface, to the Turtles’ favorite pizzeria, with the potion. Sure enough, the Turtles come by, on their way to April’s apartment and dressed as sailors, and order some pizzas to go. But Michaelangelo, Leonardo and Raphael can’t wait. They begin to eat the pizzas on the way. Only Donatello refrains. When they arrive at April’s, Irma informs them that April is at the Naval Yard — it seems something fishy is going down there and she has to cover for April at Channel Six News. But when Michaelangelo, Leonardo and Raphael lay eyes on Irma — they become lovestruck and ignore Donatello’s suggestion that they too go to the Naval Yard. In fact, Michaelangelo Leonardo and Raphael insist on going out and buying Irma some very expensive presents — the rivalry has begun.

While Irma is inundated with gifts from her secret admirers” and learns that they are sailors, April uses her TurtleCom to contact the Turtles to report that the entire submarine crew has disappeared. Donatello tells her that they’ll be right there, only to turn around to find Michaelangelo, Leonardo and Raphael fighting over the affection of Irma.

Back in Donatello’s laboratory, the Turtle scientist deduces that Shredder indeed sprinkled love potion on the pizza.

Meanwhile, Rocksteady and Bebop, aboard a Transport Module, head for the Earth’s surface. Rocksteady snacks on a slice of pizza he “lifted” from the pizzeria. Bebop warns him about eating it, but Rocksteady is confident that it will have no affect on him. They arrive at the Naval Yard and the first woman they see is April. You guessed it — Rocksteady falls “head over heels” for her and wisks her away.

Back at the Turtles’ Lair, Donatello develops an antidote and applies it to another pizza. After a bit of deception (it seems the Turtles are too in love to think about food), the love-struck Turtles are their old selves again. They hop in the Turtle Van and race over to the Naval Yard to successfully rescue April. But it looks as though Krang has won — he has stored all of the nuclear energy in the Technodrome — soon he will bring it to the Earth’s surface. But, thanks to Rocksteady and Bebop, the storage unit is destroyed and the nuclear energy along with it, as they arrive via a tidal wave of water through one of the Transport Module Tubes.

Back at the Naval Yard, Irma arrives in a wedding dress to meet one of her sailors/secret admirers, Michaelangelo, Donatello and Raphael confess that they were the ones who sent the gifts. Irma runs off screaming.