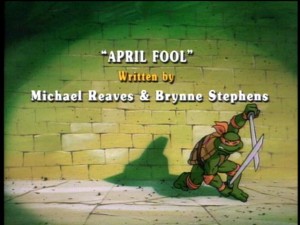 April reports live from the Malicurian Embassy, telling the tale of the Malicurian Emperor’s decision to sell mining rights to the vast deposit of Lydiam 90 that was recently discovered in his country. Later, Ms. O’Neil prepares herself for the big party that is being held at the Embassy later that night. Irma, however, persuades her friend to trade in her news journalist “uniform” for a fancy party gown so that she might attract an eligible bachelor.

Meanwhile, far below the Earth’s surface, Shredder complains to Krang that the Technodrome is falling apart and that they need more power to properly maintain life support systems. Krang suggests that a piece of Lydium 90 would supply more than enough power to bring the Technodrome back up to speed.

Back at the Turtles’ lair, April arrives dressed to the nines. The Turtles, and even Splinter, go ga-ga over her new look. April leaves for the Malicurian Embassy and the Turtles decide to follow her and keep an eye out for her.

At the Embassy, Emperor Aleister forbids his daughter, Princess Mallory, to leave the Embassy unescorted and orders her to prepare herself for the costume party downstairs. Princess Mallory pouts, turns to the camera to reveal that she looks just like the new April O’Neil, and complains of how her father always makes her dress like a Princess.

Outside, at the entrace to the Embassy, April decides to return home to change into a better costume when she is confronted by the Embassy guards and mistaken for Princess Mallory. At first she is flattered and amused, but after unsuccessful attempts to convince them otherwise, she goes along with the “gag” and enters the party.

No sooner is April escorted inside the Embassy when Shredder, Bebop and Rocksteady crash through the surface bent on kidnapping the Princess and holding her for ransom. The villains plan to exchange the Princess for the Lydium 90 specimen the Emperor brought with him from Malicuria. Upon their arrival at the Embassy, Shredder, Bebop and Rocksteady are mistaken for costumed party guests and are also escorted inside.

None of this escapes the notice of the Turtles who decide to get a closer look and swing into action.

In her bedroom, the real Princess still laments over her situation and decides to run away. When April is unable to find the Princess, she dons the “Princess” costume in an effort to get a story.

The Turtles, via their TurtleCom, contact April to warn her about Shredder and company, but it’s too late – Shredder bursts into the bedroom, and thinking that April is the Princess, abducts her. The Turtles decide to crash the party to find April. Moments later, while searching for the Princess, the Emperor discovers the ransom note and orders all exits closed off.

Princess Mallory, out in the streets of New York, sees a news report of her kidnapping. Knowing that it is a mistake and that her father must be worried, she hails a taxi and heads back to the Embassy.

While trying to find a way out of the palace, Shredder learns of his error of mistaken identity, but when the Emperor announces over the Embassy’s internal p.a. system that he will pay the ransom, Shredder realizes that they don’t know of his mistake and he decides to continue the hoax.

Meanwhile, the Turtles are lost inside the labrythinian maze of halls that make up the Embassy and are about to be turned into turtle soup by the guards when Princess Mallory arrives in time to rescue them and aid them in their search for April.

Shredder arrives on the roof of the Embassy where the Emperor awaits with the Lydium 90 sample and a fully fueled helicopter. Shredder takes the sample but refuses to turn over April, whom the Emperor still believes to be his daughter. As soon as the helicopter lifts off, the Turtles and the real Princess arrive.

The Turtles pursue Shredder and company and rescue April, but Shredder manages to escape with the Lydium 90. However, Donatello explains that where Shredder is going the sample will do him no good – it seems that Lydium 90 is unstable and the pressure 10 miles under the earth will cause the crystal to disintegrate.