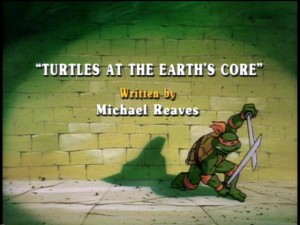 While trying to establish the location of the Technodrome based on sightings of the Probe Modules, the earth begins to shake. The Turtles, along with April, go above ground to investigate, only to discover a dinosaur roaming the city streets! Our heroes follow the beast to the city park and lose it. However, the dino’s tracks lead to a giant hole in the ground.

Meanwhile, in a subterranean “prehistoria,” Shredder, Rocksteady and Bebop, at the bequest of Krang, are attempting to steal a giant Crystal that will enable them to repair the Technodrome so they can take it to the surface. But rather than trek across the jungle floor to obtain it, Shredder employs an Anti-Gravitational Skimmer, a mistake he will soon regret as the radiation emitted by the Crystal depletes the Skimmer’s power. Shredder, Rocksteady and Bebop find themselves up the proverbial creek without any means of locomotion.

A little later, the Turtles and April, aboard the Turtle Blimp, arrive in this prehistoric world. Suddenly, they’re attacked by a Pterodactyl, causing the balloon to burst and the glider to fall to the ground, throwing the group to the feet of a Tyrannosaurus Rex. They manage to escape when another T-Rex challenges the first one to a fight, only to encounter the dinosaur they saw back on the streets of the city. The Turtles decide that the dinosaur is friendly, and it allows them to ride on its back through the jungle. Soon they encounter more Probe Modules.

Back at the Technodrome, while monitoring Shredder’s progress (he along with Rocksteady, Bebop and some Ninja Foot Soldiers are now on foot) via unseen remote control cameras, Krang discovers the presence of the Turtles and April. The alien sends his Ninja Foot Soldiers to construct a “fortress on wheels” to combat them.

Meanwhile, no sooner does Shredder obtain the Crystal, then the Turtles arrive. Alarmed, Shredder drops the Crystal at his feet, causing it to sustain, unbeknownst to him, a hairline fracture. Shredhead quickly fires a “microwave ray” at the TMNT, causing the ground around their feet to turn to molten lava. Shredder escapes with the Crystal.

The Turtles, April and the dinosaur manage to escape the molten lava and learn of the Crystal’s theft. Noticing a change in their dinosaur friend’s attitude (he seems sad), they deduce that the stolen Crystal is a source of life to the creatures in this prehistoric world. The heroes decide to get it back and go in pursuit of Shredder.

Shredder delivers the Crystal to Krang who wastes no time in discovering the fatal crack. Krang chastises Shredder for his incompetence and complains of the distorted power the Crystal will now generate. Nonetheless, Krang proceeds to repair the Crystal using all the available energy aboard the “fortress.” Suddenly, they are shaken by blows to the hull of their craft.

Outside, the Turtles and April have arrived with their dinosaur friend who bats his tail against the fortress. But it’s not enough force, so the dino calls other creatures of this prehistoric world to assist him. Within a few minutes, the behemoths have battered a hole in the hull, allowing the Turtles, April and the dinosaurs to storm inside.

Mere moments after Krang has completed the repairs to the Crystal, he is confronted by the Turtles who prevent him from recharging the Technodrome. The TMNT defeat Shredder, Rocksteady and Bebop, and escape with the Crystal.

Krang and Shredder retreat in defeat while the Turtles and April return the Crystal to its rightful place and repair the Turtle Blimp before returning to their own world.