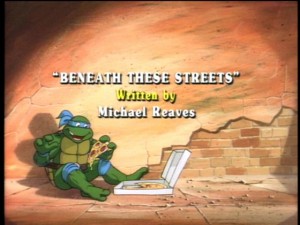 Beneath the city streets, deep in the bowels of the sewer system, Splinter is less than pleased with the Turtles when he encounters them lounging around the TV rather than practicing their daily katas (martial arts exercises). The Turtles lamely suggest that with Shredder out of the way (he and Krang were sent to the Earth’s core in the previous episode), they deserve a vacation. Splinter suggests that they have no proof that Shredder and Krang are “vanquished” and that there is still plenty of other crime/criminals to be fought.

Meanwhile, miles below the Earth’s surface, rests the Technodrome. Inside, Shredder “whines” to Krang about when they will take the Technodrome to the surface. Krang tells Shredder that they are low on power and that certain essential equipment (i.e. the Protein Silicon Brain Computer) has been damaged, thanks to Shredder’s incompetence. But Krang reassures him that they can be repaired but it will require a trip to the surface to obtain the necessary parts.

The next night while on patrol, the Turtles decide to treat themselves to a Kung Fu movie marathon. Once inside the theater, the TMNT turn off their Turtle Coms, so as to not be disturbed.

Meanwhile, Shredder, Rocksteady and Bebop arrive via Krang’s “Pneumatic Modules” on the surface. At the same time, Splinter worries that the Turtles are late returning from their patrol and is unable to reach them via his Turtle Com.

Across town, April is preparing to tape a press conference at the Metro Hospital when she’s contacted by Splinter, via her Turtle Com. April tells the Sensei that she hasn’t seen the boys in green, but will help find them in anyway she can. A few minutes later, while a Doctor (Metro Hospital Administrator) is displaying a prototype of the new Medi-Laser Gun – “the most advanced instrument know to man for healing,” Shredder, Rocksteady and Bebop burst through the doors and “liberate” the gun from the good doctor, claiming that this is just what they need to repair the Protein Silicone Brain Computer. Unable to reach the Turtles, April quickly contacts Splinter.

After the movie, the Turtles consider contacting Splinter but opt for a pizza instead. Meanwhile, April and Splinter are cruising the streets in an effort to find them. Once downtown, Splinter’s keen sense of smell enables him to locate Shredder’s hideout. Inside, he attacks Rocksteady and Bebop, giving Shredder enough time to “reverse the polarity” on the Medi-Laser Gun. The blast knocks Splinter unconscious, but not before he is able to use his staff to knock loose a component of the Medi-Laser Gun. Shredder is unaware of the missing component and orders Rocksteady and Bebop to return to the Technodrome.

April returns Splinter to the Turtles’ Lair. The guilt-ridden Turtles decide that the only way to reverse the condition of the comatose Splinter is to find Shredder, obtain the Medi-Laser Gun, reverse the polarity once again and blast Splinter at equal strength.

Krang is momentarily delighted with the Medi-Laser Gun until he discovers he can’t aim it because the “Directional Control Module” is missing. Shredder goes back to earth with Rocksteady and Bebop.

Shredder discovers that Splinter’s body is gone and decides it could only mean one thing – the Turtles have both Splinter and the “DCM.” Shredder encourages Rocksteady and Bebop to go on a rampage in Central Park. Leonardo drops a canister of sneezing gas on them from the Turtle Blimp/Glider. Rocksteady and Bebop decide to beat feet, leaving the Turtles no other option than to return to their lair. Shredder follows them. After a brief martial arts altercation, Shredder obtains the DCM, but now the Turtles have the Medi-Laser Gun. Donatello is confident that he can build his own DCM.

Meanwhile, Krang sends two Foot Soldiers to aid Shredder. Back at the lair, Donatello is unsuccessful in his attempt to build a DCM but learns, via TV, that a new Medi-Laser Gun has been built. The Turtles suspect that Shredder is aware of this as well and race to the Metro Hospital in hopes of getting there before Shredder and company.

Back at the lair, Splinter is revived. April volunteers to return the DCM to the Metro Hospital on the way to file her story at Channel Six News.