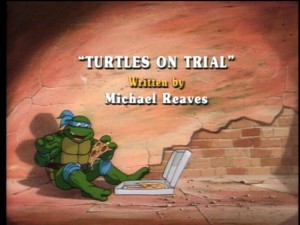 Leonardo, Donatello and Raphael are enjoying an episode of professional wrestling when Michaelangelo enters the room and turns the channel to “ON TRIAL,” hosted by Clayton Kellerman, a rabble rouser who suggests that a clear and present danger is lurking in the sewers: Teenage Mutant Ninja Turtles. The Turtles are aghast and can’t understand why people would hate them. April has her make-up department make human masks so the Turtles can move more freely in the streets.

Meanwhile, Shredder is sweating from the heat, as Krang chews him out for his failure to retrieve the necessary components to repair the refrigeration units. Shredder has had enough and suggests that Krang go up on the Earth’s surface and get what he needs and eliminate the Turtles himself. Krang considers this a good idea.

Back on the surface, April and the Turtles are enjoying pizza when an alarm sounds at a jewelry store nearby. The TMNT tear off their masks, chase and apprehend the thieves but then they are chased into the sewers by an angry mob. The Turtles decide that this is Clayton Kellerman’s doing and ask April to help them get on the “ON TRIAL” show so that they can present their side of the story.

Back inside the Technodrome, Krang, Rocksteady and Bebop see a promo for “ON TRIAL” advertising the TMNT. Krang is ecstatic, now all he needs is the perfect weapon. Shredder is now having second thoughts, he wants to go, too. Krang reluctantly agrees, but only on the condition that Shredder act as a decoy while he breaks into the military warehouse containing the Solar Benite.

On their way to the television studio, Splinter contacts the Turtles via his Turtle Com, and alerts them to a break-in at the Natural Museum of History. The Turtles cancel their “15 minutes of fame” and arrive at the museum only to encounter Shredder, Rocksteady and Bebop.

Meanwhile, Krang and two Stone Warriors obtain the Solar Benite and the prototype for a weapons-laden robot that looks like ED-209 from the movie ROBOCOP.

Back at the museum, a crowd has gathered. The sight of the Turtles incites the crowd as Clayton Kellerman predicts huge ratings. Shredder has captured April. Krang contacts Shredder and orders him to let go – he plans to destroy them on national TV with his new robot.

With Shredder temporarily out of the picture, the Turtles realize that they still have time to appear on the “ON TRIAL” show. They get a bad case of stage fright as Clayton Kellerman makes “mincemeat” out of them, suggesting that they are cowards. The Turtles try to explain about Krang and Dimension X, but it all falls upon deaf ears.

Krang is outside the studio, challenging the Turtles to “come out and play” as he fires upon the building. Clayton Kellerman is undaunted by Krang until he is fired upon and then rescued by the Turtles. Krang is easily defeated when the Turtles disable the robot. Shredder helps Krang slither back into the Pneumatic Module and they disappear back to the bowels of the earth.

Clayton Kellerman thanks the Turtles, but promises to continue “badmouthing” them in order to protect his reputation.