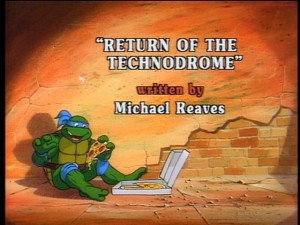 While Splinter elects to take a three day fast and meditative satori out in the woods, Krang commands Shredder to take control of the Hydro-Electric Plant at Niagara Falls. Krang is convinced that he can tap enough of the plant’s power to recharge the Technodrome and open a portal large enough for the ship to pass through.

Meanwhile, the power surge has left the city in a black out. April contacts the Turtles, who are convinced that Shredder and Krang are behind this. Further proof comes along as Donatello is able to tap into one of Krang and Shredder’s transmissions. The TMNT arrive at Niagara Falls to find Splinter, who also felt a “disturbance in the force.” With little time to lose, our heroes decide that the only way to cut the power to the Hydro Electric Plant is to stop the flow of the river that feeds into it. After subduing a small contingent of Rock Soldiers and Foot Soldiers, the Turtles are able to shut down the plant and stop the flow of the river… but it’s too late! Krang has enough power in reserve to keep the portal open and the Technodrome comes through, complete with a full battalion of Foot Soldiers and Rock Soldiers!

Before Shredder can order his army to attack, Krang stops him. It seems that the brainy alien wants to destroy the Turtles himself. Unfortunately, the Technodrome’s power has been drained due to the amount needed to come through the Portal. The Turtles, April and Splinter use this to their advantage and make good their escape.

Krang is naturally upset and orders Shredder to reactivate the Hydro Electric Plant so the Technodrome can be recharged and Krang can carry on with his plan for total domination of the planet. The alien determines that he must control New York City first, and to do that he plans to burrow the Technodrome underground, cause an earthquake and drive the citizens out of the city.

All of this might work, if not for the Turtles/Splinter. The TMNT discover the location of the Technodrome, break inside, battle with Shredder and company and ultimately alter the wiring, causing the Technodrome to burrow itself further underground – all the way to the Earth’s molten core.