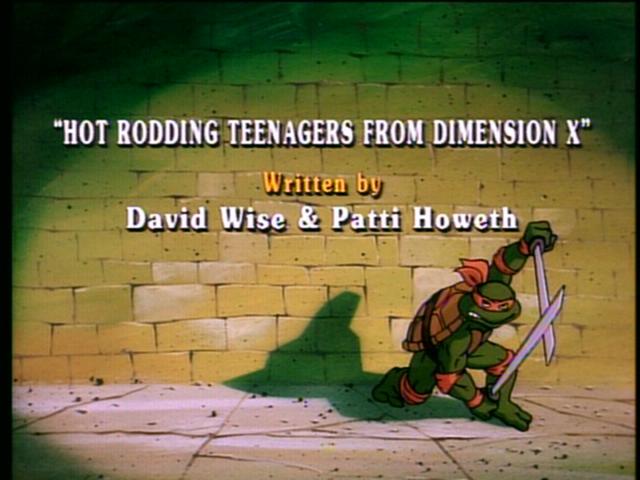 The Turtles and April return to Baxter Stockman’s workshop to convert his van (using his equipment, now that the scientist has been arrested and is a “guest of the state”) into a mobile tracking station designed to locate the Technodrome.

Meanwhile, far below the city streets, beneath the subway systems, moves the Technodrome. Inside, Krang rants and raves to Shredder about his failure to eliminate the Turtles and once again, demands the body that was promised to him. Krang continues by reminding Shredder that his soldiers await him in Dimension X, but he can not lead them without a body. The mere mention of Dimension X gives Shredder an idea – an idea as to where he will find a new weapon to rid himself of the Turtles and Splinter. Krang warns Shredder not to open the recently completed “Transdimensional Portal” to Dimension X for fear of what might come through, but Shredder does not listen.

The Turtles have completed the conversion of Dr. Stockman’s van – the end result: The Turtle Van. It is complete with every type of surveillance gadgetry and weaponry that Donatello was able to create using Stockman’s left-over scientific equipment. Now nothing can stop the TMNT from tracking Shredder and the Technodrome!

Back in the Technodrome, Shredder opens the Transdimensional Portal, only to have three teenage Neutrinos zoom by, flying futuristic versions of ’57 Chevy Bel Airs, followed by a flying “jeep” occupied by Stone Warriors. Rocksteady and Bebop fire upon them. The Neutrinos escape, but the Warriors crash and are confronted by Shredder who asks if they serve Krang. They answer in the affirmative. Shredder invites them to see something, but they flee in pursuit of the Neutrinos.

While driving through the city, the Turtles have tracked the Technodrome. It is under the Twin Global Towers. April guns the motor and races to the location, but when they arrive, the heroes are “buzzed” by the Neutrinos in their rocket- powered low riders. The Turtles and April, thinking that they must somehow be connected to Shredder, decide to pursue them.

Meanwhile, the two Stone Warriors continue their pursuit of the Neutrinos within the Technodrome and stumble upon Krang. They bow to him and admit their surprise to see Krang without his body. Krang is embarrassed and admits that he lost it when he was banished to a far off planet in Dimension X. When Krang learns that his Stone Warriors are pursing the Neutrinos, the brain becomes enraged at Shredder for the danger that he has caused. Shredder wants to know what danger, and Krang explains that the Neutrinos are juvenile delinquents from Dimension X – they hate war, they refuse to join any army, and they encourage people to have fun.

The Turtles continue their pursuit of the alien “JD’s” while Shredder equips the Stone Warriors with a Techno-Rover to aid them in their capture of the Neutrinos.

After much “daring-do,” the Turtles “capture” the Neutrinos, only to learn that they are not in cahoots with Shredder after all. Realizing that they’re all on the same team, the Turtles treat the Neutrinos to pizza and video games, where they learn more about the grim life in Dimension X. April suggests that maybe they should be concerned with what was chasing them at the time of their transdimensional teleportation when the CLOWN TIME FOOD AND GAMES EMPORIUM is leveled by a missile attack from the Stone Warriors. The Turtles defend the Neutrinos by jumping into the Turtle Van and engaging the enemy. After a great deal of laser fire between the Turtles and the Stone Warriors, the Techno-Rover is incapacitated, allowing the Turtles, April and the Neutrinos to escape before the police arrive. The Stone Warriors retreat back to the Technodrome, but not before they’re able to release a “weather satellite” that will, in two hours time, create a hellacious storm – one that will level the city.

Back in the Turtles’ lair, the Neutrinos tell Splinter about the Stone Warriors and their evil Overlord, Krang. When asked about Krang, the Neutrinos tell them that he was banished from Dimension X, lost his body and is now just a brain. Splinter and the Turtles conclude that this is the same brain that Michaelangelo encountered when they defeated the Mousers. Splinter also now realizes where Shredder has been getting his advanced technology and fears that Krang will bring his Stone Warriors into this dimension. The Neutrinos and the Turtles agree to team-up in an effort to send Krang and his Stone Warriors back to Dimension X.

Up on the streets it’s snowing in June! The Neutrinos suspect that it’s the result of one of Krang’s “weather makers,” and they, along with the Turtles and April, race back to the Technodrome.

Once there, the heroes have no problem finding the room that houses the Transdimensional Portal. Donatello and Leonardo are left behind as Michaelangelo, Raphael and the Neutrinos go searching for Krang. Before Donatello and Leonardo can figure out how to operate the machine, Rocksteady, Bebop and some Foot Soldiers engage them in hand-to-hand combat.

Meanwhile, Michaelangelo, Raphael and the Neutrinos are engaged in laser fire with Shredder, Krang and the Stone Warriors. After dispatching the Foot Soldiers and sending the Stone Warriors and the Neutrinos back to Dimension X, the Turtles face off with Shredder only to be distracted by the effects of the “weather maker” outside. When the TMNT return their attention back to Shredder, he’s gone. The Turtles elect to go back up to the surface and save the city, while saving their revenge on Shredder for another time.

Up on the streets, it is “Hell on Earth.” Using one of the Neutrinos vehicles, the Turtles fly into the storm, created by the “weather maker.” Leonardo deactivates the device with his sword by slicing it in two like a melon.

Meanwhile, at the Technodrome, Shredder agrees to give Krang his body if he promises to destroy the Turtles. Krang agrees.

Back at the Turtles’ Lair, April reads from a book as Donatello, Michaelangelo, and Raphael snuggle under their covers. It is the story of the Tortoise and the Hare. As they drift asleep, Leonardo enters the room cleaning his sword and suggests that the “boys” need their rest, vowing to find Shredder on the morrow.