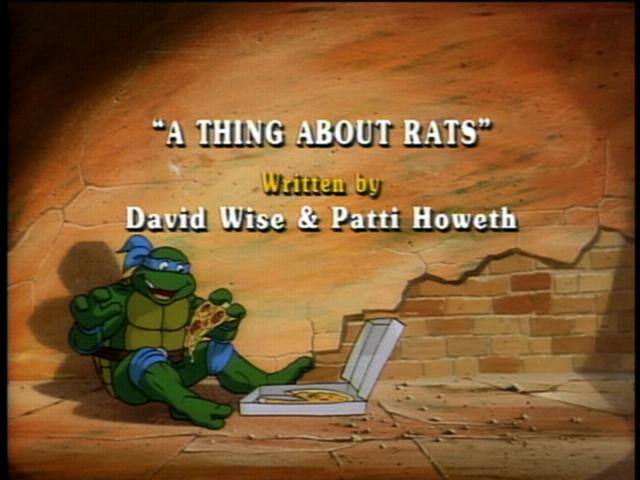 HEROES IN A HALF SHELL – Part Three “A THING ABOUT RATS”
Written by David Wise and Patti Howeth
Directed by Yoshikatsu Kasai
No script/show number available
Original Ar Date: December 30, 1987

Under the city streets, deep within the Turtles lair, Splinter rests/recovers from his confrontation with Shredder (in the last episode) and the Turtles vow to find the Technodrome and to force Shredder to revert their Master back into a human.

Meanwhile, Shredder relocates his base of operation within a deserted mansion within the heart of the inner city. Here, he unleashes a squadron of flying mechanical bugs, equipped with remote control cameras, in an effort to find a source for new scientific equipment.

In another part of the city, a scientist/inventor named Baxter Stockman is trying to convince the Ajax Pest Control company to invest in his latest invention: the Mouser, an armless mechanical “creature” designed to catch rats. The President of APC, throws him out on his keister “suggesting” that the Mouser would drive him out of business. However, the scientist’s demonstration did not go unnoticed (thanks to Shredder’s flying bug cameras). Stockman is invited to accept Shredder’s offer of employment.

While the Turtles grumble about how they can’t find the Technodrome but still can’t give up searching, Shredder returns to the deserted mansion with Dr. Stockman and orders the meek scientist to create a master control device to manipulate the hundreds of Mousers that he plans to assemble by dawn.

Shredder returns to the Technodrome where his computers analyze the Mouser prototype and then begin replication. As Shredder begins to revel in delight, he is summoned by Krang, who once again demands to know when Shredder will provide him with a body. Shredder suggests that Splinter and the Turtles represent a more urgent problem but Krang does not accept it. The alien insists that there would be no problem if he had the body that Shredder has promised him. Shredder turns on his heals and leaves, as Krang fumes – hoping that Shredder fails again and again until he has no choice but to give Krang his body.

Back in his lab, Shredder is too impatient to wait until his machines have replicated the first batch. He programs the first twelve Mousers to seek out and destroy Splinter.

Back at the Turtles lair, Splinter has recovered enough from his encounter with Shredder so that April decides to return to her own life and see if she still has a job. Splinter agrees and, while he is meditating, is visited upon by Shredder’s Mousers. Using his martial arts skills, Splinter is able to dispatch them one by one, but he is still outnumbered. When it looks as though they are about to overpower him, the Turtles return and kick “shell.” After every last Mouser lies in metal fragments on the sewer floor, the Turtles question their source and discover the name “Baxter Stockman, Inventor” engraved on every last one of them. Somehow, they believe that Shredder is behind this and decide the first step is to find the egomaniac who put his name on the “death machines.” The Turtles suggest that Splinter travel with them so that they might protect him better. The Sensei agrees and suggests that they enlist April’s help once again.

While Shredder fumes at the report that all twelve of his Mousers are out of commission, April is less than excited to see the Turtles again so soon. While she checks her computer files on Baxter Stockman, the Turtles wreak havoc in her apartment. She is able to provide them with a photograph and an address on Baxter Stockman and sends them on their way before they can do any more damage.

Back at the deserted mansion, Stockman has completed the Master Control Device and refuses to stay to see the “fruits of his labor.” Fearing that Stockman knows too much, Shredder orders his Foot Soldiers to follow him in the Turtle- Seeking Cycle. A few minutes later, he unleashes 1,200 Mousers to seek out and destroy Splinter, the Turtles and April O’Neil.

Baxter arrives at his home/workshop, but before he can turn the key in the lock, he is accosted by Shredder’s Foot Soldiers. Before the robots can do him any harm, they are dispatched by the Turtles, who want some answers from the scientist – pronto. After tying Stockman to a nearby lamp post, the TMNT convince him to tell them about the Mousers and Shredder’s involvement. Baxter tells them his story. Realizing that the “deserted mansion” is all the way on the other side of town, and with no time to lose, the Turtles “borrow” Stockman’s van. En route to Shredder’s secret location, the TMNT realize that the original 12 Mousers had no problem finding Splinter – and now there are 1,200! They turn around and head back to April’s apartment.

The heroes arrive at the deserted mansion. Donatello uses the equipment in Stockman’s van to try to control the Mousers. Michaelangelo is “elected” to sneak inside the mansion in an effort to put the Master Control Device out of commission, but Shredder captures Mikey and recalls all his Mousers to attack the other Turtles (along with Splinter and April), as they wait outside. When it looks like the end is near, Krang rescues Michaelangelo and tells him where he can find the Master Control Device. Mike is reluctant, but takes Krang’s advice when he is informed that his friends are in danger.

Michaelangelo encounters Shredder and insults the villain until his outrage makes him careless… careless enough to fire his laser rifle at Mikey, who jumps out of the way, allowing the laser blast to destroy the Master Control Device. This enables Donatello to reprogram the Mousers (with Stockman’s original hand control device) to attack the deserted mansion. As the building falls apart around him, Shredder escapes to the Technodrome (which is “parked” underground) and beats a hasty retreat.

The Turtles, once again, are dejected by Shredder’s escape, but decide to keep Baxter Stockman’s van (and all the equipment inside) in an effort to help them track their arch enemy. As they drive away, Michaelangelo tells his disbelieving friends about a “talking brain.”