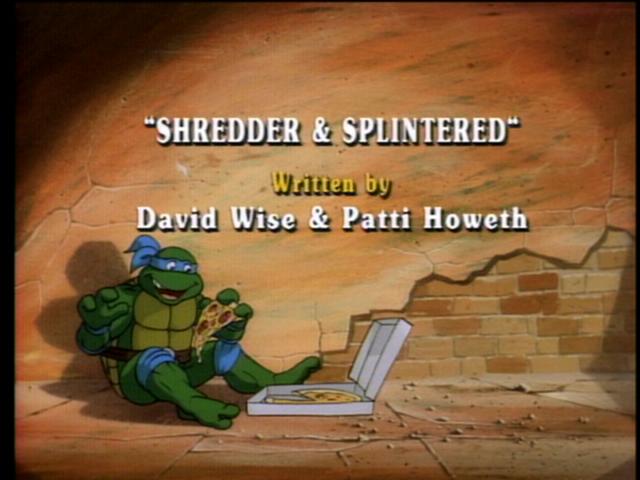 The news is out… people all over the city have reported sightings of the Turtles, and April is not happy about it. Why? Because it’s not her story! The Turtles reassure her that she will get the full story and suggest to Splinter that they can wait no longer: they must put Shredder away. The mutant Sensei agrees.

While April returns to Channel Six News (with the Turtle Van and a Turtle Communicator) to gather her film crew, Splinter and the Turtles are contacted by Shredder via their television set. Shredder displays what appears to be a ray gun and explains that it is a Retro-Mutagen Ray Generator – a device that undoes mutations. He suggest that it is the only thing that will transform Splinter back into Hamato Yoshi and invites them to “come and get it.” The Turtles are more than anxious to accept Shredder’s offer, however, Splinter suggests that he alone must go after Shredder for fear that he might use the Retro-Mutagen Ray Generator on the TMNT – thus transforming them back into ordinary turtles.

Back at the Technodrome, Shredder delivers on his promise to Krang: a new body. Krang is delighted and tells Shredder to install a “Molecular Amplification Unit” microchip. Shredder is reluctant at first, but Krang convinces him that his subordinates have failed once again and that there is no time to waste – the Turtles are on their way. Shredder submits. He loads the microchip, places Krang within the body and, like a scene out of FRANKENSTEIN, throws the switch that will bring new “life” to Krang.

Meanwhile, Krang is right. Leonardo, Michaelangelo, Raphael and Splinter are just outside the Technodrome.

Back inside, the Turtle Alert Alarm has sounded. But Shredder is not ready – Krang’s new body hasn’t had enough time to “come to its senses.” He summons his Foot Soldiers to attack the intruders.

Outside, at the base of the Technodrome, the Turtles and Splinter are under heavy attack and decide to split-up. While the Turtles fight off the Foot Soldiers, Splinter sneaks inside to find the Retro Mutagen Ray Generator. The Turtles easily defeat the Foot Soldiers by hacking open a few raw sewage lines that “flush” them away.

Meanwhile, at the Channel Six News Building, April is about to get fired by her boss, Vern, for being in cahoots with the Turtles. O’Neil convinces him that the Turtle Communicator is a “Hyper-Turtle Death Ray” and tells her boss to sign a voucher authorizing her a film crew. Frightened, Vern readily agrees and signs the document.

Inside the Technodrome, while Shredder is elsewhere, Krang awakens and is delighted with his new body and heads for the Transdimensional Portal room, where he is monitored via remote control camera, by the TMNT. The Turtles suspect that the alien is about to bring reinforcements from Dimension X, so they head out to stop him.

Elsewhere within the Technodrome, Splinter has discovered that the Retro Mutagen Ray Generator is actually just a hologram. Once again the Sensei has been duped by Shredder, and once again Shredder engages him in marital arts combat.

Back inside the Transdimensional Portal room, Krang summons GENERAL TRAGG, one of his trusted Stone Warriors from Dimension X. General Traag announces that 12 brigades of troops are ready and waiting. Before Krang can open the portal to lead his soldiers into this world and conquer it, he is attacked by Leonardo, Michaelangelo and Raphael. Krang activates his recently installed Molecular Amplification Device, allowing him to grow/expand 20 times his natural height. The gigantic android chases the TMNT out of the Technodrome, where it smashes a hole through the street surface and climbs up and out.

The Turtles pursue Krang and witness the destructive powers of the enlarged robot. Just as the TMNT are about to be crushed by Krang’s boot heel, they’re saved by Donatello aboard his new creation: The Turtle Blimp (which was created from the Nutrino Speeder and Baxter Stockman’s spare parts).

In an attempt to stop Krang from expanding even more, Donatello separates the balloon from the glider and soars down close to the giant android’s head. Don and Michaelangelo dive onto Krang’s shoulder and climb inside his enormous body. April, Burke and their film crew arrive in time to videotape Leonardo and Raphael, as they circle Krang in the glider like a buzzing bee. While inside Krang’s body, Donatello and Michaelangelo attempt to find the source of energy that allows Krang to expand and destroy the growth mechanism.

It doesn’t take the mutants long. Once they destroy the energy source, the Turtles must quickly scramble out of Krang’s now shrinking body. Back to his normal size, Krang feels ill-prepared to handle the “boys in green,” so he summons Shredder, who is still engaged in combat with Splinter… but not for long. With the flip of a switch, Shredder imprisons Splinter in an electric cage and disappears to save Krang.

Fearing that Shredder will use the Retro Mutagen Ray Generator on the Turtles in his effort to save Krang, Splinter uses one of his long fingernails to remove a metal screw in the floor, heaves it through the electrical cage and destroys its generator. With that done, the Sensei chases after Shredder, hoping to stop him before he can do harm to the Turtles.

Up on the streets, as the Turtles are about to be reverted back to their natural state, Splinter arrives in the nick of time and hurls his staff at Shredder, knocking the Retro Mutagen Ray Generator out of his hands and destroying it. While the Turtles thank Splinter and sadly acknowledge that the RMRG was his only chance to become human again, Shredder and Krang escape back to the Technodrome.

Back inside the Transdimensional Portal room, as Krang’s Stone Warriors are entering Earth’s dimension, Donatello is able to reverse the flow of the portal, causing it to pull itself into Dimension X. The Technodrome and everyone inside (Shredder, Krang, Rocksteady, Bebop and the Foot Soldiers) are gone.

Shredder is less than happy to discover that he is in Dimension X, and he is even more upset when Krang reminds him that he is the “boss.” April reports her story on the Turtles, who are busy congratulating themselves on a job well done… but Splinter warns them that he fears that they have not seen the last of Shredder or of Krang.