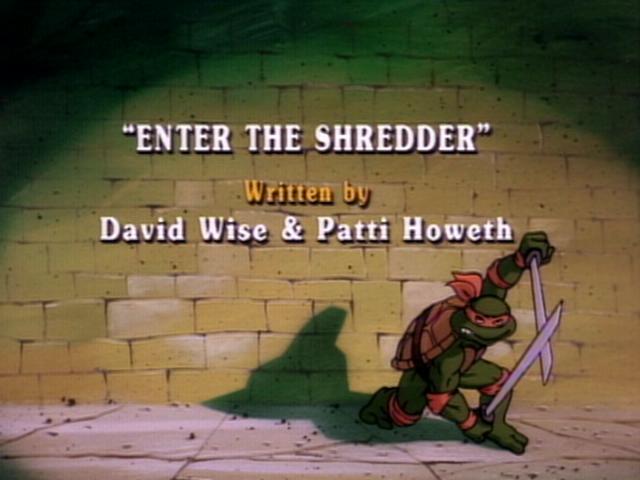 April O’Neil and the Turtles journey through the city’s sewer system to search for the thing that Shredder referred to as the Technodrome, which would have been located directly under the now destroyed MANHATTAN SECURITY SERVICES building. When they arrive, our heroes find nothing. April is convinced that the Technodrome is mobile and suggests that they travel through the immense subterranean tunnel system to continue their pursuit, but the Turtles suggest that they return to the lair and inform Splinter.

Meanwhile, Shredder, who is commandeering the Technodrome in its escape and is furious that his “mighty Foot Soldiers were defeated by a bunch of Turtles,” is summoned to the bowels of the Technodrome by Krang. Krang, a gelatinous creature that looks like a talking brain, is likewise upset that Shredder, despite the vast technical knowledge that Krang has provided for him, has been unable to provide the evil alien with a body so that he may “lead his legion of followers out of Dimension X and into this world to crush it.” Shredder offers a feeble excuse regarding their lack of safety as long as Hamato Yoshi and his Turtles roam the sewers.

Krang then suggests that when Shredder tried to destroy Yoshi with the Mutagen it in fact made him stronger because of his contact with the rats. Shredder picks up on this line of thought and realizes that if he were to expose his own thugs to the Mutagen, along with wild animals, he could then defeat Yoshi and the Turtles.

Back at the Lair, Splinter is convinced that his old enemy, Saki, is the mastermind behind the Robotic Ninjas and offers his help in tracking down the Technodrome. While he and the Turtles begin their search, April agrees to return to Channel Six to see if there have been any sightings of the Technodrome.

Meanwhile, a Rhino and a Warthog are “liberated” from the city zoo by two Robotic Unicycles that have erupted through the sidewalk.

Back underground, Splinter and the Turtles stumble upon the tracks/treads of the Technodrome. They are getting closer.

Meanwhile, within the Technodrome, Shredder “convinces” Rocksteady and Bebop to undergo an experiment that will enable them to get even with the Turtles. This experiment involves the Mutagen and the liberated rhino and warthog from the city zoo.

At Channel Six, April’s boss Vernon is unimpressed with April’s progress on the theft of the high tech scientific equipment and reassigns her to the theft of the rhino and warthog from the city zoo. Outside the Channel Six building, April encounters the Turtles disguised as “break dancers.” She convinces them that the zoo theft could lead them directly to the Technodrome.

Meanwhile, Splinter himself has located the Technodrome, only to be taken prisoner by one of the Robotic Unicycles.

At the zoo, the Turtles climb/fall down through a hole left by the Robotic Unicycles and land at the feet of the Technodrome where they find Splinter’s walking stick. Shredder suggests that they enter the Technodrome if they ever want to see Splinter alive again. Knowing a trap awaits them, the TMNT enter the alien craft.

After a series of obstacles (closing walls and psycho robots) the Turtles find Splinter strung up from the rafters within a cavernous room. As they prepare to cut him down, Shredder enters, accompanied by four of his Ninjas. He congratulates the Turtles on their prowess and suggest that they join his Foot Clan. He also suggests that they “owe everything to him,” because by creating the Mutagen (in an effort to destroy Hamato Yoshi), he created the Turtles. When the Turtles refuse, Shredder summons the mutated Rocksteady and Bebop, who are easily defeated along with the other four Ninjas.

The Turtles cut Splinter down and return to the city surface only to have Rocksteady and Bebop burst through the street, with laser rifles blasting. Once more the Turtles defeat them, this time by leading them into the city zoo and entrapping them in a cage.

April arrives just in time to video tape the capture of Rocksteady and Bebop and offers the Turtles and Splinter a ride home. The reporter also threatens to not let the mutants out of her sight until she gets the whole story. The Turtles promise to tell her, but remind her that as long as Shredder is still loose, the story is not over.

Moments after they leave, a lone Robotic Unicycle bores up through the Earth, breaks Rocksteady and Bebop out of their “prison,” and informs them that Shredder wishes to see them.