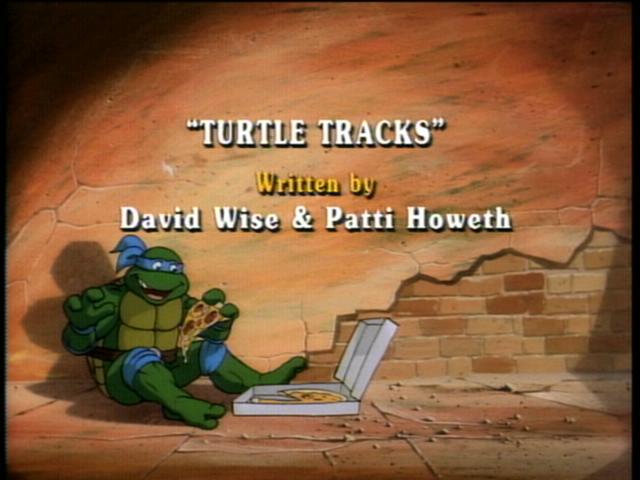 Channel Six investigative reporter, April O’Neil, is assigned to report on the mysterious thefts of high tech scientific equipment from various scientific laboratories across the city. During the course of her investigation, April learns that the thieves might be ninjas. She and her film crew stake out a scientific lab that she thinks could be the site of a potential “hit”… only to be accosted by a gang of thugs. The reporter’s film crew panics and flees. April makes a run for it and slips into a drain and is pursued by the thugs under the city streets through an intricate maze of sewer tunnels. When O’Neil is finally cornered by the weapon-brandishing hoodlums, four figures emerge from the shadows to successfully defend her. They are the TEENAGE MUTANT NINJA TURTLES! April faints when she sees the identities of her protectors.

The Turtles bring April back to their lair where she encounters a giant rat, SPLINTER, who decides that he should tell her who they are and how they came to be…

Back in Japan, there was a Ninja Clan, known as The Foot, led by HAMATO YOSHI, a quiet/gentle man who loved art. One of his students, OROKU SAKI, constantly challenged him in an effort to usurp his leadership, finally causing him to be banished from the Clan. Yoshi fled to the United States in poverty. He was forced to live in the sewers, where he made friends with the rats. One day, a small child was returning from the pet store with a fish bowl of baby turtles, when he tripped and fell, causing the bowl to crash on the street and the turtles to fall into a drain. Yoshi found four new friends.

Meanwhile, back in Japan, the Foot Clan, under Saki’s evil leadership, turned into an “army of criminals.”

One day, back in New York, Yoshi discovers the turtles covered in “goo” which he later learns was some new powerful “mutagen” that “caused whoever touched it to take on the form of whatever animal they most recently had been in contact with.” The turtles became humanized, because of their recent contact with Yoshi (in his effort to clean them up), and Yoshi was transformed into a rat because of his recent contact with the rodents. April now realizes that Splinter is Yoshi.

Splinter continues by relating how they got their names. The Turtles christened Yoshi with the name Splinter because of his “martial artistry,” and Splinter provides the turtles with the names of his favorite Renaissance painters. Realizing the outside world would consider them freaks, Splinter trained the turtles in the ancient art of Ninjitsu and they in turn vowed to find the person responsible for their “mutagen bath” so that Splinter can become human again.

However, April is not convinced that the Turtles are not the thieves. She tries to escape with her latest “news flash,” but is detained by the Turtles who are in no hurry to “go public” with their story. They finally strike a deal. The Turtles will help April find the real Ninja thieves and get her story while she agrees to help them find the source of the “mutagen.”

The Turtles accompany April on the city streets with a matchbook that was left behind at the scene of the fight between the Turtles and the Thugs, and disguised as human (dressed in trench coats and fedoras). Their destination: The Ninja Pizzeria – where they hope to learn more about the high tech hijacks. While the Turtles feed their faces with pizza, April scouts the neighborhood and comes upon MANHATTAN SECURITY SERVICES. She enters the lobby with suspicion and overhears the receptionist dispatch a “security team” to another scientific equipment lab that is “just waiting to be cleaned-out.” April makes a call to Channel Six from a nearby phone booth only to be abducted by three Ninjas.

Meanwhile, the Turtles become impatient waiting for April to return and decide to search for her. Within moments, they find her wallet and her press pass. A few minutes later they see her purse hanging from the roof of an abandoned tenement building. Up on the roof, they find April tied to a chair. They soon learn that it is a trap as they engage in martial combat with a team of Ninjas, only to discover that their foes are robots.

Shredder, who has been watching the scene via remote controlled cameras, recognizes the fighting style of the Turtles and suspects that Hamato Yoshi still lives.

The Turtles defeat the Robotic Ninjas, rescue April and then pursue the retreating Ninjas to the roof of the nearby Manhattan Security Services building. April and the Turtles lose the Ninjas, but are spied by Shredder via his closed circuit camera system. Now, more than ever, he is convinced that these Turtles have been trained by Yoshi. He orders his Foot Soldiers to retreat to the Technodrome and to flood the building. April and the Turtles race to the roof of the building with a torrent of water close on their heels. They escape from the roof just moments before the building explodes from the water pressure.

Back at the Turtles underground lair, Splinter studies the uniform of one of the Robotic Ninjas. He is convinced that it is the uniform of the Foot Clan and that his old enemy, Saki, is nearby.