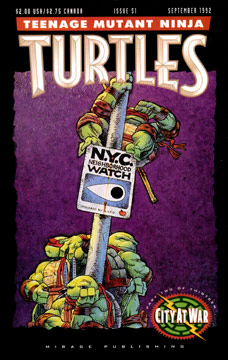 The Turtles have taken up residence in a large, empty water tower on top of an old New York City building. The guys are restless and directionless without Splinter to guide them, upset by the news reports of escalating street violence between the fractured factions of the Foot Clan. Violence that the TMNT feel responsible for, as it was their actions that lead to the splintering of the Foot. Raph wants to take the fight to the Clan and finish what they began when Leo killed Saki, but Leonardo isn’t sure that they need to continue fighting Splinter’s blood feud with the Foot for the rest of their lives.

Casey is still driving out west in his Chevy and falling asleep at the wheel. As he startles himself awake, he remembers how he had tried to begin a relationship with April by holding her hand, but she said to him, “Oh, um… Casey… don’t” and walked off. Jones felt bad about his advance and later returned to the farmhouse with flowers to patch things up, only to find that O’Neil had packed her things and left. This enraged Casey, and he picked up a dresser and threw it through a window. As Casey reflects on his recent past, he’s once again startled to his senses when he almost has a head-on collision with a truck. Jones decides that he needs some coffee and food, and so he stops at a diner in Goat Head, Colorado. The place is deserted except for the waitress/cook named Gabrielle, who Casey hits it off with. Gabby asks Casey if he’s headed out west to become a movie star, as she’s seen her share of people passing through with that goal.

April is in Los Angeles with her sister Robyn, hanging out in a night club. Robyn tries to get April to cheer up and they discuss Casey and the “guys” that April left behind in NYC. Robyn wonders why April has been so secretive about all of them and why she’s so unhappy lately.

Casey finishes up his coffee and heads out of the diner when he’s accosted by two thugs. The men attack Jones and eventually knock him out by smashing his skull with a gasoline can, and then they steal his car! Gabby rushes out and helps Casey inside.

The Turtles check out the bridge site and find no clues. Feeling vulnerable, they decide to head back to their base.

Robyn and April get back to Robyn’s messy apartment. Robyn asks April what she wants to do and April says they should clean the apartment.

The sisters decide that they’ll go to the beach and then embrace, happy to finally be spending some time together again.

The Turtles are running along the rooftops when they hear some noise in an alley. They cautiously investigate, only to find some boys kicking a garbage can around. The guys get antsy and are obviously on edge.

“This really sucks,” Don gripes, “How long are we going to wander around hoping to run into the Foot when we don’t even have a plan for what to do when it happens?”

“Plus 30 seconds ago, we were ready to jump all over some kids playing with garbage cans… what the Hell are we doing?” queries Mike.

“Let’s face it guys,” Raph quips, “We’ve been reduced to the neighborhood watch!”