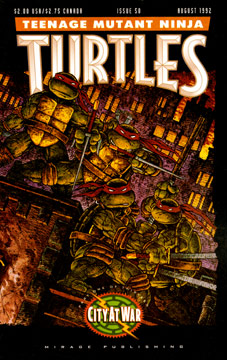 “City at War” Part 1
This issue lays the ground work for the 13 part story in the typical artistic Eastman and Laird fashion, utilizing the theme of shards – both literally and metaphorical.

Much of what goes on in this issue occurs simultaneously – revealing only fragments of everyone’s lives. Hence, this synopsis will be fragmented as well, to maintain the theme. :)

Splinter meditates in the woods of Northampton.

A Foot soldier plants a bomb in a New York City pornography shop.

Casey Jones is packing his bags. As he picks up a photograph of himself with April and the Turtles, he focuses his view onto O’Neil and then throws the picture angrily against the wall, breaking the glass of the frame.

The Turtles prepare to leave Casey’s farm in Northampton, Massachusetts.

Casey finishes packing, but before he leaves, he picks up the broken frame and retrieves the photo.

The old man in the apartment eats his dinner as he watches the news.

Everyone is feeling isolated, upset and unhappy.

Cut to New York City, where we see a gang of Foot Soldiers beneath a bridge. As one advances, he is quickly slain by a Foot Elite who appears out of nowhere. The Elite proceeds to kill all of the remaining Foot, hunting the last one who flees to the City’s rooftops. The retreating Soldier slips on the ledge of building, but is saved by the Elite. As the underling pleads for his life, the Elite beheads him with his own blade.

Casey fires up his Chevy and heads out.

The TMNT stow away on the roof of a bus, making their way back to the Big Apple.

The old man continues to watch the television, growing more morose as the news of the world appears to get more grim.