MutantOoze is proud to announce that we will be giving away a few copies of the book Raise Some Shell by Richard Rosenbaum. There will be three ways to win, please note that this giveaway is only for US and Canada residents. Winners will be announced August 8th and will be contacted for shipping details. If I do not get a response from the winners within 24 hours another will be selected. 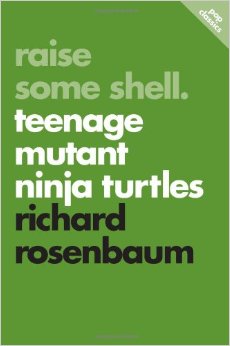 So let’s get down to how you can win a copy of this awesome book!

1 – The first way to win is to follow @mutantooze on Twitter and then tweet a “shellfie” in your favorite TMNT gear to @xoNerdyGirl (my honorary judge). Once you have did these two things you will be entered to win. NerdyGirl will then pick her favorite “shellfie” and we will notify the winner.

3-The final way to win is to head on over to the TMNT sub-reddit and post a comment in this thread with your favorite TMNT memory. My favorite story will win a copy of Raise Some Shell.

MutantOoze also had the opportunity to ask the author a few questions. Check out what Richard Rosenbaum had to say!

Richard, many of the TMNT fans that visit my site probably have no idea who you are, so please tell me a little about yourself and why you chose to write a book about the Teenage Mutant Ninja Turtles.

I’m a writer from Toronto, Canada and a lifelong Turtles fan. The awesome Canadian publisher ECW Press announced that they would be launching a new series of “Pop Classics” books, that would examine some piece of the popular culture and explain why it was important or influential or beloved. And I immediately knew I had to write one about Ninja Turtles – aside from my twenty-plus years of Turtles fanboyism, I’d written a piece about Ninja Turtles as a metaphor for the experience of minorities in America for a website called OverthinkingIt.com, and I realized that there was so much more going on there than it was possible to cover in a thousand-word essay. So I was totally prepped to pitch my idea for a TMNT book to ECW; they were into the idea, and kindly let me write it!

What does the 30th Anniversary of TMNT mean to you? Did you grow up with the turtles property or did you find an opportunity to write about the franchise and go with it?

I absolutely grew up with the Turtles, I’d been watching the show and movies and reading the comics and playing the videogames and collecting the toys since I was ten years old, and followed them through every incarnation over the years, both the good ones and the bad ones. To me, the 30th Anniversary of TMNT just proves what I always felt about the Turtles: that they weren’t just a fad or a gimmick, but characters that deeply resonated with millions of people, that deserve our attention, that are as relevant and would be as enduring as other superheroes like Batman (celebrating 75 years) or the X-Men (who had their fiftieth anniversary last year).

What was it like switching from writing fiction to writing a non-fiction book about fictional characters?

I have written non-fiction before (for OverthinkingIt.com and Broken Pencil Magazine and some others), but yeah, fiction is kind of my most natural mode. It wasn’t too different, though – it’s a subject that I’m very familiar with and enthusiastic about, and it gave me an opportunity to reread and rewatch a bunch of Turtles stuff and just pour out my thoughts. My editors at ECW were also really helpful in keeping me on track, reining me in when I got too blathery, and letting me know when something I wrote wasn’t clear enough and needed more detailed explanation, and so on.

Obligatory who is your favorite turtle?

What was the most surprising aspect about the TMNT franchise that you discovered through your writing?

People still really care about the Turtles! And not just in a nostalgic way. I started noticing a lot of people casually mentioning Ninja Turtles just out of the blue in the media or whatever, and when I told anybody that I was working on a book about Ninja Turtles, so many of them were really curious and excited to hear about it. You wouldn’t guess that TMNT was still so important to so many people, but it is – much more so than any of the other artifacts from childhood. When I was in my twenties and watching the 2003 Turtles cartoon and reading the Mirage comics and stuff, I didn’t feel like a lot of my peers really cared very much, but now because of this book I’m seeing that TMNT means a lot to a lot of other people too – I feel more like part of that community, and that’s been really unexpectedly awesome.

Thank you for taking the time to answer some questions. If any of our fans have anything else to ask we will be sure to let you know!

*Richard Rosenbaum is a fiction editor at Broken Pencil (Canada’s magazine of the underground arts and independent culture) and a regular contributor to OverThinkingIt.com. He received his Master’s degree in communication and culture from Ryerson University, and this is what he’s doing with it. He lives in Toronto, Ontario.