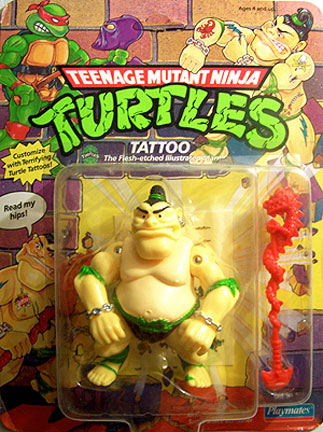 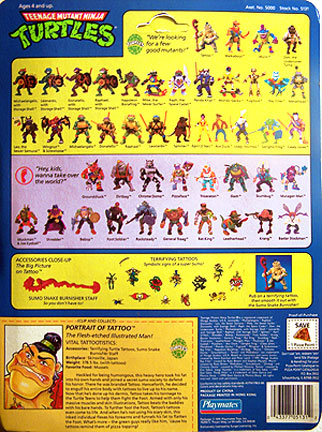 PORTRAIT OF TATTOO
The Flesh-etched Illustrated Man!
VITAL TATTOOTISTICS:
Accessories: Terrifying Turtle Tattoos, Sumo Snake, Burnisher Staff
Birthplace: Skinsville, Japan
Weight: 378.5 lbs. (with tattoos)
Favorite Food: Mussels
Heckled for being humongous, this heavy hero took his fat into his own hands and joined a secret sumo society to defend his honor. There he was branded Tattoo. Henceforth, he decided to engulf his entire body with tattoos to live up to his name. Now that he’s done up his dermis, Tattoo takes his tonnage to the Turtle Teens to help them fight the Foot. Armed with only his massive muscles and skin illustrations, Tattoo beats the baddies with his bare hands. To further fool the Foot, Tattoo’s tattoos even come to life. And when he’s not using his scary skin, this inked individual flexes his forearms and funnels his fat to flatten the Foot. What’s more – the green guys really like him, ’cause his tattoos remind them of pizza topping!
Images provided by Vaughn Michael
©1991 Playmates Toys