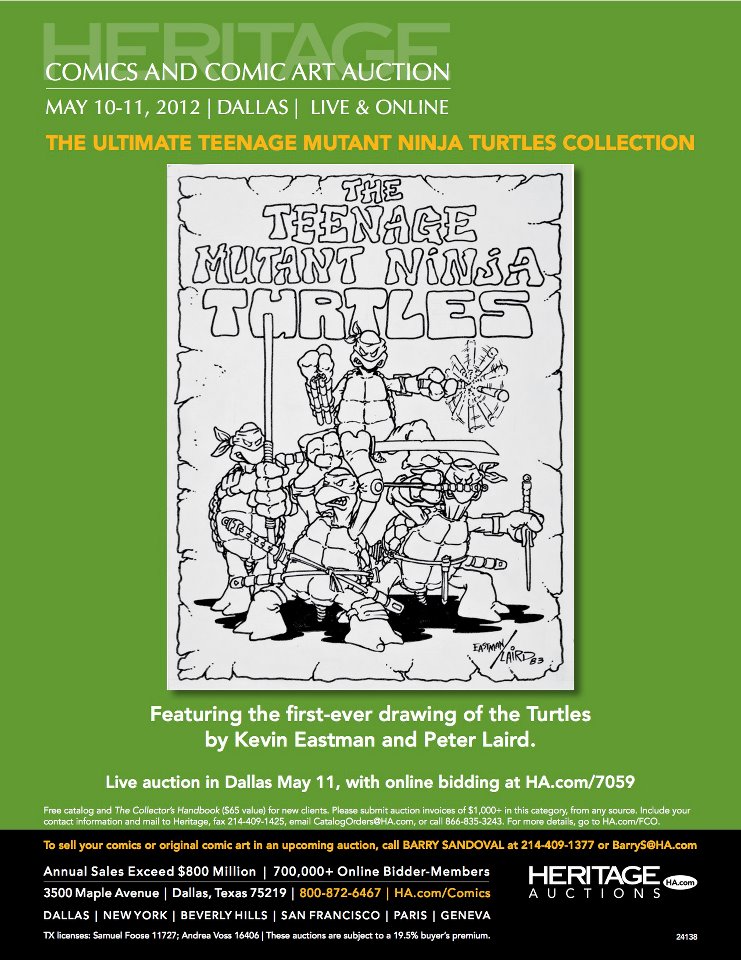 Kevin Eastman and Peter Laird: First-Ever Drawing of the Teenage Mutant Ninja Turtles (1983). The story behind this piece is well-documented, but if you’re joining us late, here’s the full lowdown from the pen of Kevin Eastman:

“Late in November 1983, Peter Laird and I were sharing a studio (our living room) in Dover, New Hampshire . One work night , in an effort to make Peter laugh, I drew a sketch of this character I called a “Ninja Turtle” and threw it onto Peter’s desk. He did laugh, and did a version of his own — to which I needed to take it one step further, and did a pencil sketch of four different Turtles, each holding a different weapon — and gave it to Peter, who wanted to ink it in — and when he did, he added “Teenage Mutant” to the “Ninja Turtle” part of the logo, and we both fell off our chairs!”

“The next day, we both looked at the drawing, and decided that we really needed to come up with a story about how these characters came to be — and began to hammer out the story details. Deciding to make it an homage/parody to some of our heroes and inspirations — (and dedicating it to them) — we worked through the winter of 1983-84, and after finding a local New England printer, we borrowed money from my Uncle Quentin, and we printed the first 3 ,000 copies — premiering the book at a local Portsmouth comic convention May 5th, 1984.
From that day forward, and for the next thirty years, the TMNTs became a world wide phenomenon (cartoons, toys, and movies) that even to this day we still try to completely understand — and it all started with this drawing… ”

The piece should be familiar to most any Turtles fan, as it’s been reprinted many times over the years. It was sent out in the original press release package back in 1984 and found its way into much of the early press coverage. It was also shown in the First Comics graphic novel in 1986, a special edition reprint of the first issue from 1992, and as a pin-up in some of the Mirage black and white issues.

Marker on paper. This piece has an image area of 8.5″ x 11″, and the art is in Excellent condition. From the Collection of Kevin Eastman.

Eastman, Kevin:Kevin Eastman is the co-creator of the wildly successful Teenage Mutant Ninja Turtles. In between “TMNT” projects, he established the “Words and Pictures Museum of Cartoon Art”, created an artist friendly publishing company, “Tundra Publishing” where projects like “The Crow” “From Hell” and “American Splendor” first flourished, and purchased world renowned “Heavy Metal Magazine.”