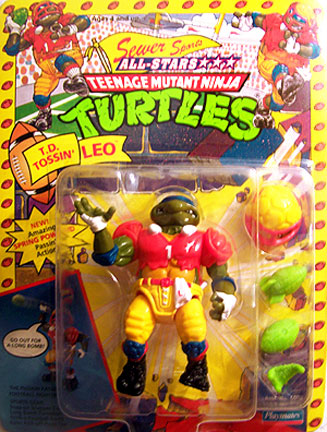 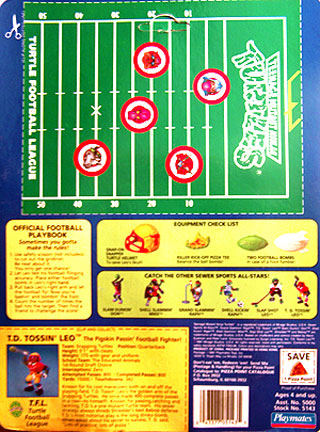 PORTRAIT OF T.D. TOSSIN’ LEO
The Pigskin Passin’ Football Fighter!
Team: Snapping Turtles
Position: Quarterback
Height: 5′ 1″ with cleats
Weight: 175 with gear and uniform
School Team: The Educated Animals
Acquired: First Round Draft Choice
Interceptions: 0
Attempted Passes: 800
Completed Passes: 800
Yards: 15000
Touchdowns: 342
Known for his cool maneuvers on and off the playing field, T.D. Tossin’ Leo’s the golden arm of the Snapping Turtles. He once made 400 complete passes in a row – to himself! Known for passing, catching and tackling, T.D.’s a one mutant Turtle team. His sewer strategy always shreds Shredder’s best Bebop defense. T.D.’s most notorious play is the long stinko bomb. When asked about his secret success, T.D. said, “Lots of practice, lots of pizza.”
Images provided by Vaughn Michael
©1991 Playmates Toys