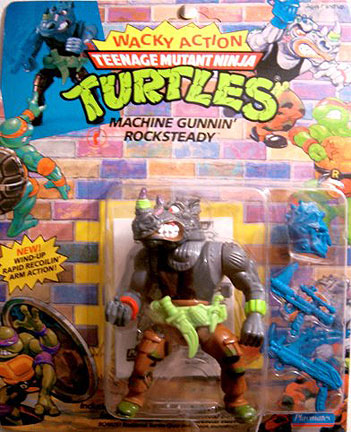 PORTRAIT OF MACHINE GUNNIN’ ROCKSTEADY
The wind-up rhino with rapid recoilin’ arm action!
VITAL ROCKTISTICS:
Accessories: Terrifying Tusk Gun, Pulverizing Pistol, Boxing Skull Glove and Survival Belt!
Action Feature: Rapid Recoilin’ Arm Action!
Machine Gunnin’ Rocksteady’s got a grip on his gun and an itchy trigger finger to boot. He’s one riled rhino who wants nothing more than to turn the Teens into torn Turtle targets. He’s armed and dangerous, with orders from Slice ‘n Dice Shredder to shoot first and ask stupid questions later. There’s no hope for a Turtle that gets caught in Rocksteady’s cross-eyed cross-hairs. With his terrifying tusk gun loaded, Rocksteady’s ready to blast belly bustin’ bullets at anything that’s green and good. So wind him up and set him down, but for goodness sake, dude, keep your head low! And remember, if the barrage of bullets doesn’t hit the mark, Rocksteady’s always got his survival belt as back-up.
Additional image provided by Vaughn Michael
©1991 Playmates Toys