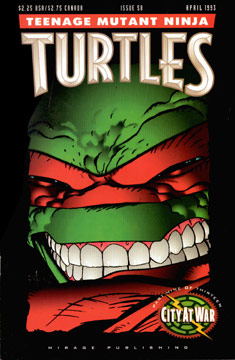 Casey dreams that he’s walking with Gabby, when a monstrous version of himself shows up wearing the trademark hockey mask. Casey’s evil twin knocks him out with a swing of a golf club and carries Gabby off to his waiting Chevy and speeds away. Casey stands up and notices a woman crying on a bench, as he walks over to comfort who he thinks is Gabby, he discovers that it’s April.

Casey awakes from the dream in a doctor’s waiting room. The physician asks Jones to step into his office, and promptly tells Casey that Gabby has died due to complications during childbirth.

“It’s a small comfort, I know,” the doc explains as Casey stares in shock, “But I was with her in those final moments and she looked quite at peace. The baby… we want to keep her in the maternity ward for a few extra days… just to be on the safe side. It’s never easy losing loved ones, Mr. Jones. However… you have a little daughter now… and she needs you.”

With that, the surgeon exits the office and Casey is left to himself, utterly dejected.

The TMNT are debating whether or not they should help Karai and ally themselves with the Foot Clan. Raphael is still against the idea, but Leonardo wants to finish this business, move on from their current path and stop living the lives Master Splinter assigned to them.

“I’m unsure… I would gladly die for him… but… I don’t know if I can give him my life.” Leo responds.

As the guys debate the issues, Donatello finally surmises that it’s a moot point to argue. Since the Elite have sworn to kill Leo for slaying the Shredder, the Turtles will have to stop the Elite before they succeed in assassinating Leonardo. All four finally agree to seek Karai’s assistance in dealing with the Elite.

Master Splinter is finally recovering from his wounds and lack of food, and is visited by a cheerful Rat King. The rodent liege tells the mutant rat that he’s been trapped for two months, much longer than Splinter had thought.

“It has been educational” the Sensei notes.

“You came. You sought enlightenment,” Rat King begins, “I was merely your guide…”

“And my tormentor.” Splinter interrupts.

“Your beliefs, deeply held, sometimes blind you,” states Rat king,”The walls erected in our minds block out the light of knowledge.”

“That lesson is clear to me now… I can see why I was lead to this place.” Splinter acknowledges.

“Yes… I’ve waited a long time for your arrival.” announces the Rat King.

“You knew… I would come…?” asks Splinter.

“Hmmm… so… the Master becomes the student.” the Sensei muses.

“…and may it ever be so.” concludes Rat King.

Meanwhile, the old man is still recovering in the hospital from the injuries he received from the Elite’s bombing. The fellow is sitting up by himself and watching TV, unfortunately the news of international war remains grim and he becomes morose.

The TMNT are climbing buildings to reach the rooftop of Karai’s skyscraper headquarters. As they reach her rooftop, they find murdered Foot guards. The Turtles scramble through an open door and find the Foot’s leader cradled over the body of a dead girl, surrounded by even more dead Foot Soldiers.

Leo looks at her ruefully, and states, “I swear it.”

Robyn and April meet with the executor of their father’s estate in New York City and discover that they’ll each be getting two hundred thousand dollars! Robyn asks April if she wants to go back to California with her to start a business, but April states that her mind is made up – she’s going back to New York City. The sisters hug.

Casey is driving in the desert and crashes his Jeep into the side of a cliff. Uninjured, Jones emerges from the vehicle and starts climbing the rock face, carrying a container with him. As he reaches the top of the mountain, Casey removes the lid and scatters the ashes within.