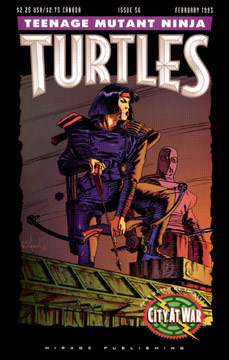 April is finding her new job as a computer programmer to be tedious and pointless, and she’s not getting along with her boss.

Casey and Gabby get married at the local Justice of the Peace and return to their trailer. Since the couple has no money to go on a honeymoon, Casey has decorated the place to look like a tropical island.

Master Splinter continues his dialog with the Rat King. Rat King insists that the Sensei must eat the rats in the silo, otherwise Splinter will die of starvation and in turn, be eaten by the rodents. Splinter refuses to “surrender to the darkness of brute necessity.”

“Then your quest ends here… ends now,” Rat King states, “Poor man-beast… you truly believe that your animal nature blocks you from your goal of pure, perfect thought… tell me… when you reach that exalted plane… what do you expect to find there?”

“What if it is… the rat?” Rat King asks, “The animal… the pragmatic scavenger… the survivor?”

April gets back to Robyn’s apartment after work and the sisters have another argument over the messy state of the dwelling.

“You come here all screwed up from some weird relationship you can’t even talk about… I open my house to you, give you a shoulder to cry on and all you do is criticize me and my life?!!” Robyn exclaims.

“I heard what you said… and I’m sick of hearing it! Mom’s dead… and you’re not Dad!” with this Robyn storms out of the room.

Master Splinter captures a rat, and looks into its eyes. The rodent bites the Sensei on the hand.

“I… cannot…” Splinter decides as he lets the creature go.

“To deny the inner beast… means your death.” Rat King tells him.

“Better then… to die…” concludes the Master.

Meanwhile, the Turtles remain in their water tower headquarters, maintaining a lethargic watch. Karai arrives at an apartment that has been set up by her agents to spy on the TMNT. She checks out the scene through a telescope and orders an assault on the Turtles.

The Foot blow up the floor of the tower and the TMNT fall through to the rooftop below. A fight ensues, the Turtles facing off against Karai’s Foot Soldiers.

We see a shot of the old man, sleeping in his hospital bed.

Karai is unhappy with how quickly the fight has escalated into loud gunfire and orders her assistant, Yanura, to bring out the taser guns. Leonardo is caught by surprise and shocked into submission. Donatello concludes that the remaining three must escape, but Mike refuses to leave. However, facing impossible odds, the three remaining brothers make their escape. As they flee, Karai shoots an arrow near them that contains a message: “555-4290 Call me”

April gets a phone call, when Robyn comes into the room to see who it was, April announces that their father died that morning.