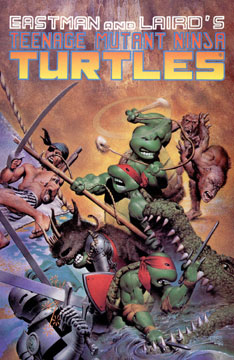 “Turtles Take Time”
As the issue begins, the TMNT are battling pirates on the high sea. Once the Turtles have swabbed the deck with the foul freebooters, Don pulls an odd cube out of his belt. We discover that the cube is a time travel device that the guys got from Renet, Lord Simultaneous’ not-so-able assistant, who we met back in TMNT #8.

Don then recants the tale of how the cube arrived in the Turtles’ lair that morning. While the guys were sitting around complaining about being bored, the “anamorphically autosynchronous” hexahedron materialized from thin air right before their eyes. Along with the cube came a warning note from Renet… a note that the TMNT didn’t bother to read. Instead, Don set the date on the cube to 1500 A.D. and the guys were instantly teleported back in time to the deck of a Portuguese Man o’ War. The Turtles discover exactly what “anamorphically autosynchronous” means, as they’ve been mysteriously changed while on their journey – not only are the Turtles decked out in swahbuckler garb, but Don now has a wooden leg, Leo has an eye patch, Raph has rotten teeth and Mikey has a… handle-bar mustache. The Captain of the Man o’ War welcomes the Turtles help in capturing the pirates… and the rest is history.

Don then activates the hexahedron again and the Turtles are teleported back to their lair – only to discover that they’ve come back a bit too early in the timeline, and are now confronted by themselves! Don realizes that they can’t exist together in the same time frame just as a “Timequake” erupts and teleports the Turtles to a new era.

When the dust settles the TMNT find themselves in the sewers, still encased in their eggshells. Fortunately their legs have broken free and there are cracks in the shells for them to see through… cracks that reveal a hungry alligator bearing down on them! The Turtles dive into the water, with the gator in hot pursuit! Fortunately, before anyone is eaten, another Timequake erupts and carries our heroes away.

Now the Turtles find themselves garbed in Medieval armor and weaponry… although Donatello is no longer with the group! As Raph, Leo and Mike collect themselves, their met by the Knights of the Round Table, who decide to attack the TMNT! The battle doesn’t go well for the Turtles, and just as Mikey is about to meet the sharp end Lancelot’s blade, Donatello arrives to save him. As soon as the battle is over, another Timequake sends the lads back to the dawn of man.

The Turtles, now dressed in skins and armed with prehistoric weapons, are beset by a band of hungry apemen. Donatello can’t control his bestial temper and wipes out the entire tribe! Once the dust has settled, Don fears that he’s doomed humanity by destroying their ancestors. Right on cue, the worst Timequake yet erupts and carries our heroes…

Back to the present, safe and sound in their sewer lair, as if nothing has ever happened.

Once Donatello realizes that none of their actions in the past have had any effect on the present, he reaches for the cube once more.

“So much for the past,” Don states as he fumbles with the hexahedron, “So, you guys ready to check out the future?”

The remaining three Turtles lunge for their brother, weapons readied.