April’s friend Molly is in Egypt, working for Tech II. The construction company was forced to hire Molly to surpervise their project due to Egyptian laws. The government requires a representative to protect the country’s unknown heritage that might be destroyed by construction projects. Molly invites Ms. O’Neil to visit her on the site of the digging, where Tech II plans to build a tourist resort.
As April prepares to leave, the TMNT try to convince her to stay, but the reporter won’t hear a word of it. O’Neil invites the guys to tag along, but the Turtles aren’t interested, so April speeds off to the airport.

In Egypt we find the foreman of Tech II’s construction job lamenting the condition of the local workers – it seems they’re all behaving like zombies and creating problems. The foreman wants to get work started on his project before Molly finds historical treasures that will jeopardize the resort project.

That evening, Molly and April are enjoying the local festivities when a man rushes up and takes the ladies to the dig – where he shows them an ancient brooch. In the morning, April faxes an image of the brooch to the TMNT and asks them to research its origins. O’Neil is confident that it’s a rare crest that she saw in one of Donatello’s books. Sure enough, Don finds the brooch in a reference book. The talisman was made by Aunkamen to help him overthrow the pharoah. Aunkamen was an evil and bloodthirsty man who used black magic to reach his goals. He never became pharaoh, but he did leave a curse with the brooch: “In the time of the uncovering, I will rule the Earth for a million years of death and destruction.”

Upon reading this, the Turtles head to Egypt to help April and Molly!

Meanwhile, the ladies have discovered a newly dug tunnel that hadn’t been authorized. The guard at the entrance is in a zombie-like stupor, and he bids the pair to enter. The two inquisitve women find a huge half-man, half-jackal monster waiting for them in the tomb! The Jackal explains that he is here to usher in Aunkamen’s reign and build a new temple to honor his leige… he also tells Molly and April that his master will have them as his queens! The women want no part of this and try to escape, but the Jackal uses a magical staff to animate two half-man, half-beast statues and Molly and April are captured.

The Turtles eventually arrive in Egypt and set off into the desert to find their friends. When they find the tomb’s entrance, it is being guarded by several mummies. The TMNT quickly dispatch their ancient adversaries and head deeper into the cave.

As the Jackal prepares to revive his master, he gets a whiff of the Turtles and animates an army of monsters to battle them. After a long fight against numerous monsters, the Turtles face the Jackal himself. The TMNT pin the beast down and Leo smashes his magical staff – which reverts all of the creatures back into their statue forms… the Jackal included!

The guys head off in search of the gals and they’re all united in short order… unfortunately they also find the mummy Aunkamen! The monster uses magic and the Turtles are in dire straits! Aunkamen picks up a heavy statue and hurls it at Donatello, who dodges to the side – thus the statue hits a support column and causes a cave in! Fortunately, everyone escapes the crumbling cavern, save for the evil Aunkamen. 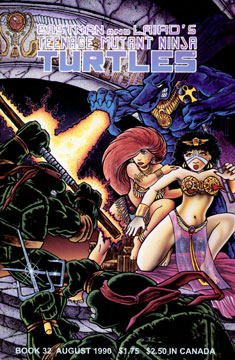 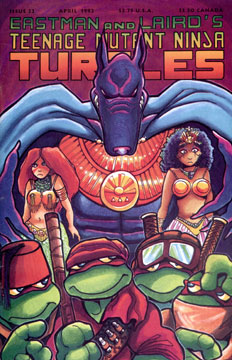 Note: This version is in full color!